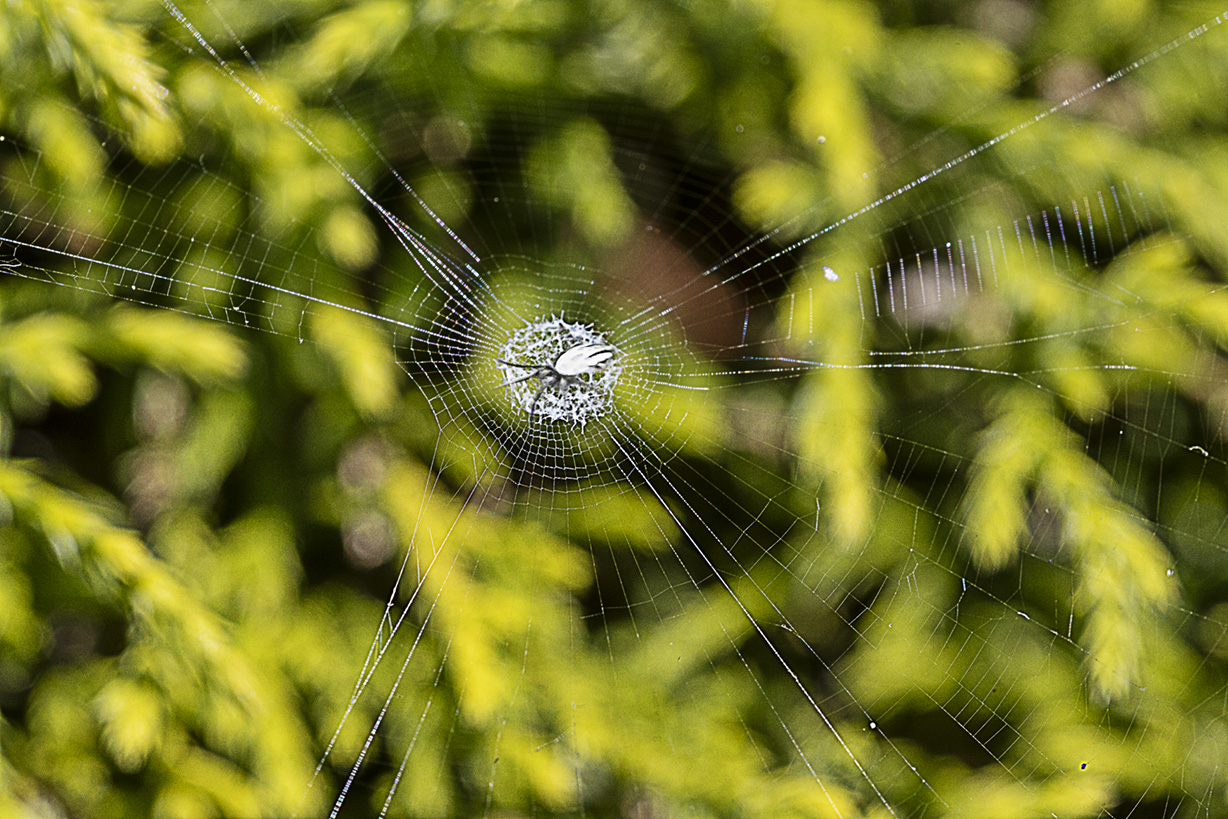 I was looking for bugs or dragonflies in our garden and noticed this tiny spider in the middle of a very large web. The spider was only about 1/4 inch long so it was interesting it had such a large web. I shot a few images with my iPhone then went in to get my 150mm Macro with a Canon 1.4x Teleconverter. I should have also shot a wider shot showing the whole web. I did not confirm the type of spider but think it is an Orchard Orb-weaver.

RainDrops After The Rain 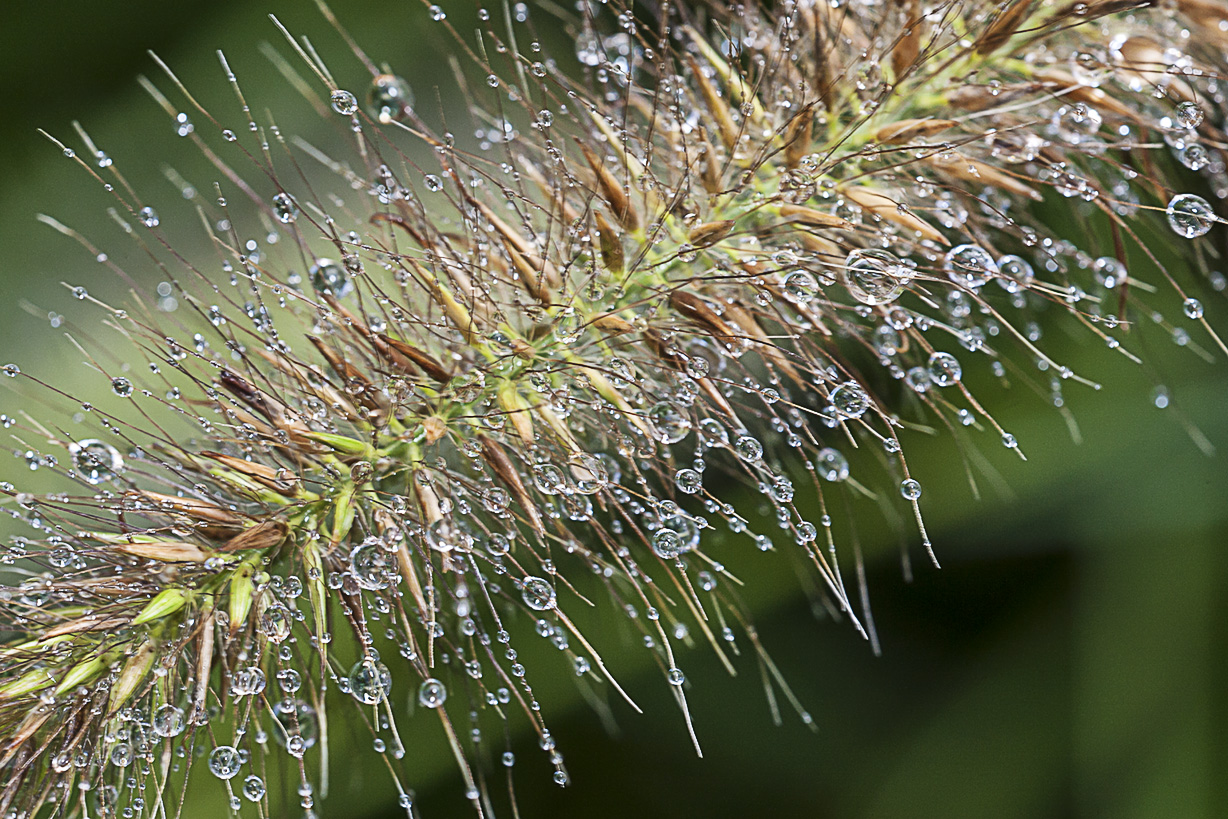 A series of Rain Drop images after a heavy rain storm. All Images were taken with a Sigma 150mm Macro lens @ f/8.

I am going through backup Hard Drives clearing out files not needed to clear up some of my storage space. I found this image of an Male Eastern Forktail Damselfly covered with the raindrops after a heavy rain. I thought it looked interesting with the heavy amount of raindrops. I was using a Sigma 150mm macro lens with a 1.4X Teleconverter on a Canon 1D MkIV. To get more in focus but still keep a soft uncluttered background I was shooting with my aperture @ f/4.5. I shot 9 images along the Damselfly and the water drops . Then loaded them into 1 layered Photoshop file to blend into my final image. Luckily the Damselfly did not move as I was photographing it. The 2nd image is a Immature Female Eastern Forktail Damselfly shot at the same session as the Featured Image.

After a rain it is fun to go out in the gardens to photograph raindrops. To get more Depth of Field (sharper focus across the image) and still have a smoother background, I use Focus Stacking techniques. I usually use f/8 or f/11, but it depends on how many images I want in my Focus Stack and how soft a background I want. The more wide open your f/stop, the more Focus Points you will need to add to the series of images. The Featured Image was 10 images taken with a 150mm Sigma macro lens @ f/8 on a Canon R. Images were loaded into 1 Layered Photoshop file and then let Photoshop align the 10 layers. (Edit-Auto Align Layers). After aligning the layers, choose Auto-Blend Layers to let Photoshop blend the sharpest sections from each layer into the final image. This Layer will be on the top of the layered Photoshop file. You will see the masked layers below the final showing the sharpest sections Photoshop masked and blended for the final layer on top. I usually save this layered file in case I need to go in and do a slight touch up here or there. Start with a 3 or 4 layered stack to help get the feel for doing this technique. Once you have done a few you will get the technique down and see what f/stops or how many layers work best for your imaging style. Also the amount of layers depends on how much of the image you want to be in sharp focus. 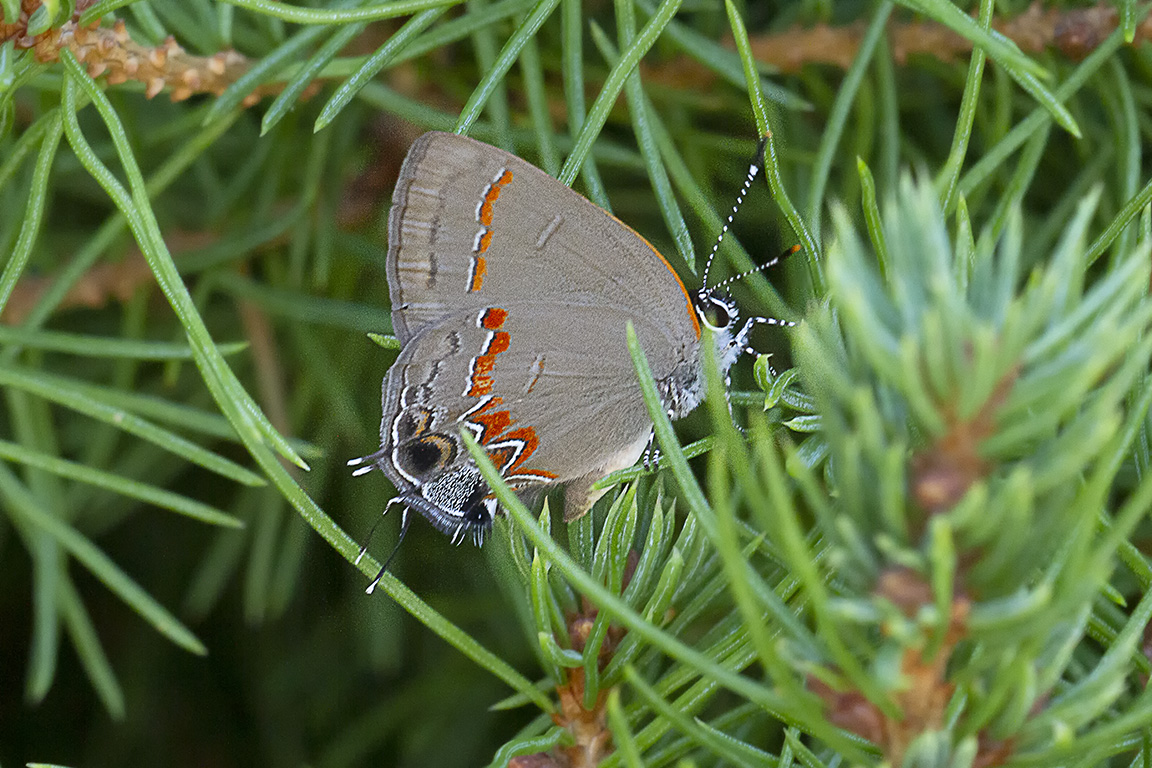 I was out in the yard looking for macro subjects after the Tropical Storm Isaias. In our community we had a few large branches come down from the strong winds, but nothing too major from what we saw during an early morning walk. We did not loose power, but 40% of our town lost power and close by towns were without power. Apparently it will take days for all power to be up again. A lot of the roads are closed and takes hours to try to get anywhere. Even close by stores are probably without power also, from what neighbors said that tried.
In the yard we found a Banded Hairstreak Butterfly in a Dwarf Alberta Spruce by our front door. I was able to get a few images before it disappeared in the Alberta Spruce. I was using a Sigma 150mm macro with a Canon 2x teleconverter.

Blue Dasher In Our Garden

I noticed a male Blue Dasher on the top of a Gladiola in our garden as I was looking out the window. So I went out to get some images to post. It has been unusually extra hot here in NJ, so we have not gone to any of the local parks lately. As I was inching closer to the Dasher, it flew off, but quickly returned to the same spot. After doing that multiple times it finally stayed on the tip of the tall plant. I guess it began to tolerate me as I was inching closer. I was hand holding my camera, but I shot a series of focus points along the dragonfly for image stacking. The Blue Dasher was close to the side of my home so I was shooting wide open to have a smoother background. This eliminated the shadows under the rows of siding that would have given confusing rows of darker stripes to the background. I was using a Canon R with a Sigma 150mm f/2.8 macro and a Sigma 2x teleconverter. So with the 2x teleconverter, my wide open f/stop was f/5.6. I manually focused a series of focus points from wingtip to wingtip plus close ups of the face. I was surprised the Blue Dasher did not fly off and allowed me to get right in it’s face, so to speak. So I tried many different focus stacks to see which might work better. Here are a few images from the series. 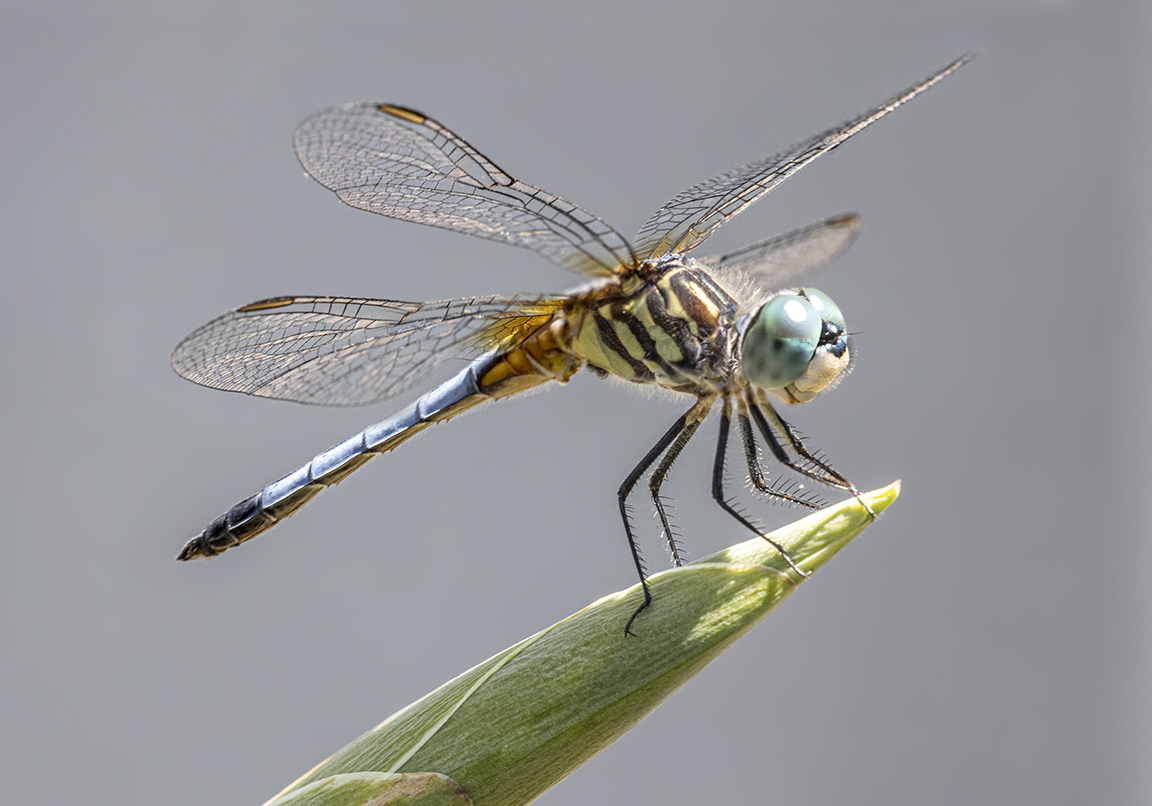 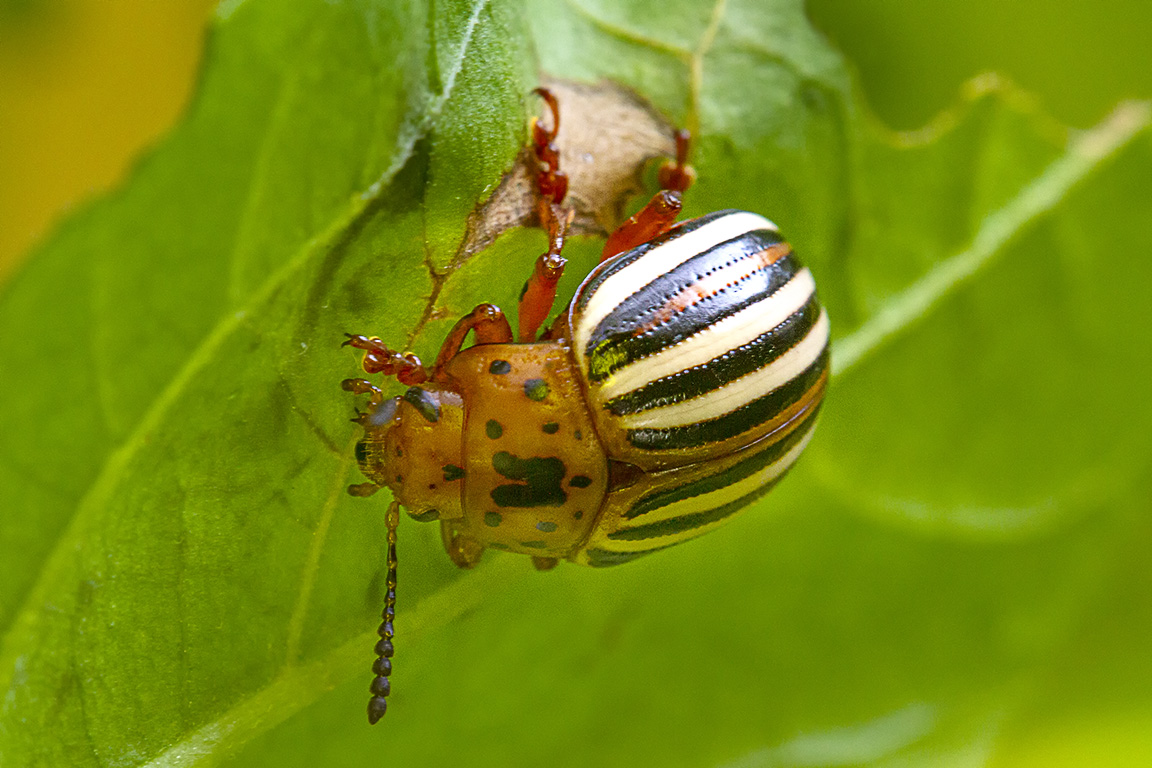 Sometimes it is fun to go out in the yard or fields to see what subjects you can find close at home. I look to see if there are any interesting bugs to photograph. Usually I look for dragonflies, but any insects will do. Here are a series of Cucumber Beetles. I was using a Sigma 150mm macro lens with a 1.4x teleconverter on a Canon 7D. I  also used a flash with diffusion to add some fill light to lighten the shadow areas to give a more even light on the images. 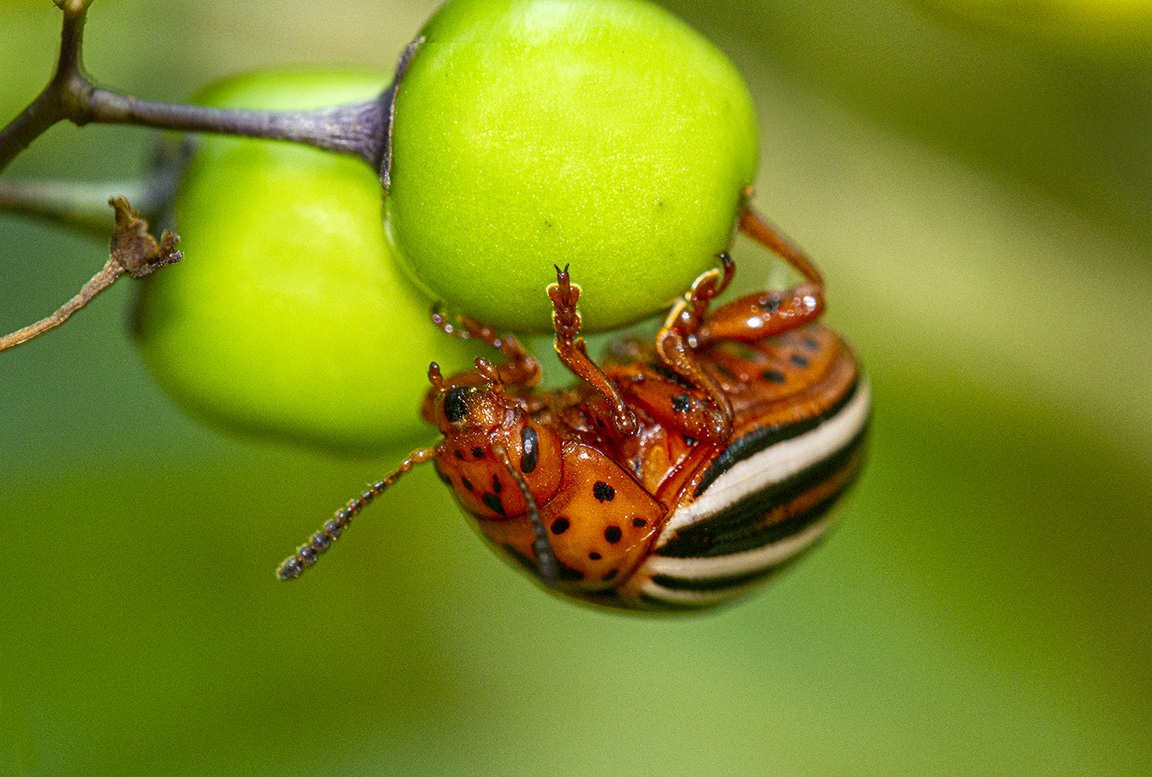 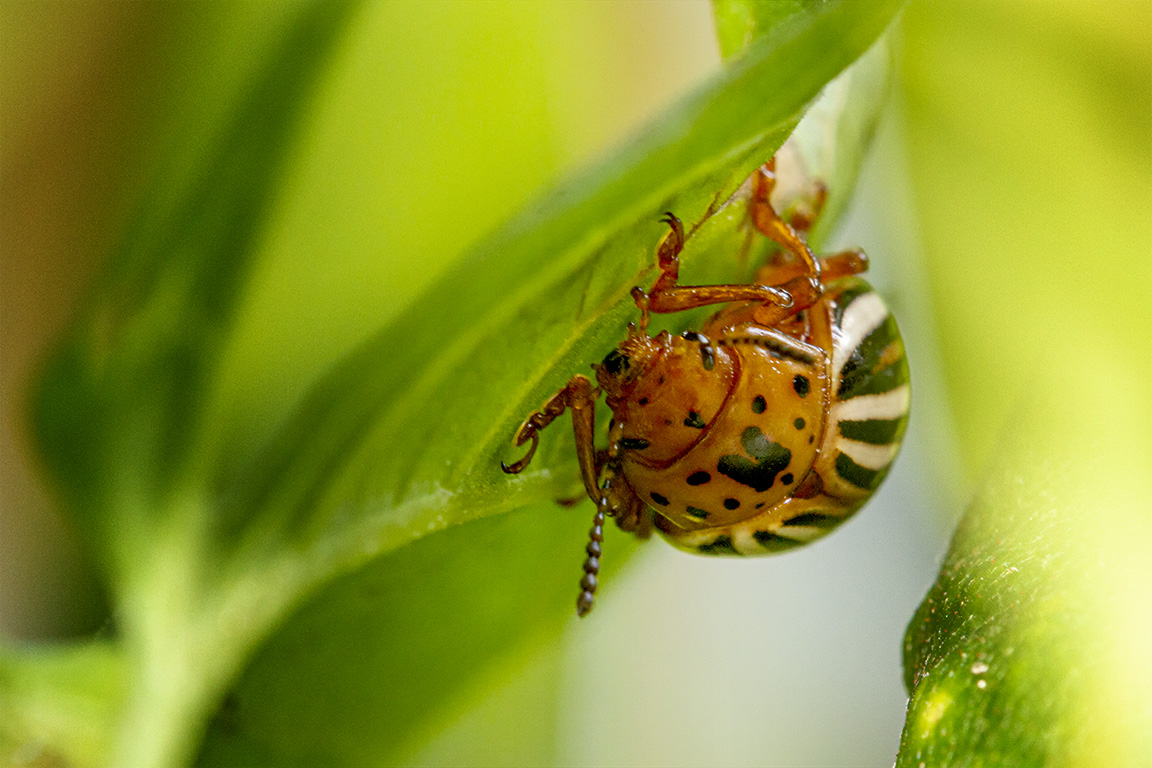 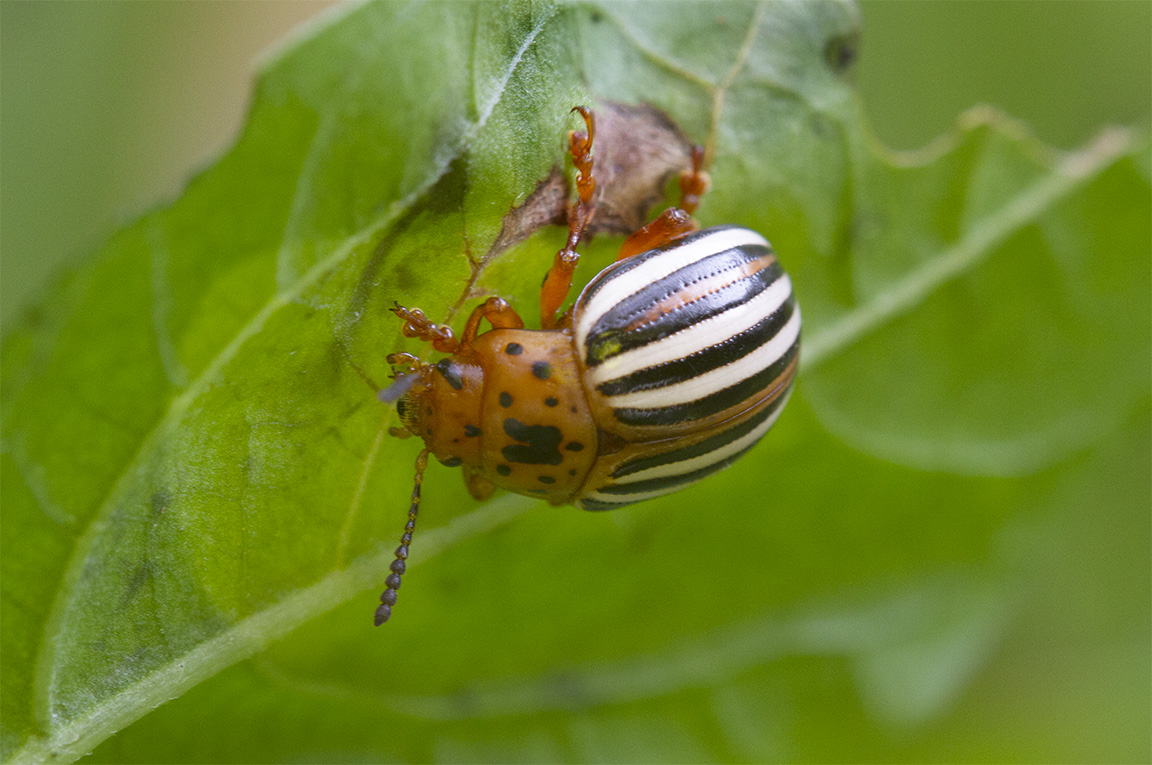 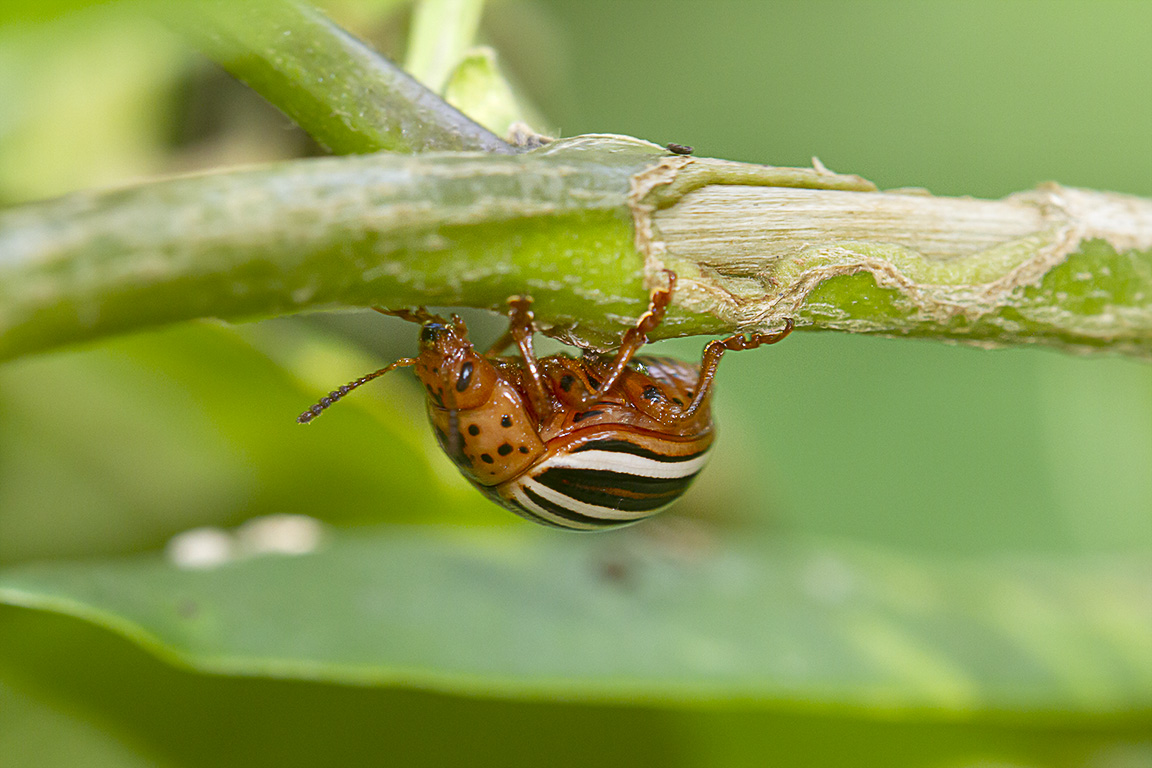 Odd Bug Under A Leaf

I was going through old backup drives cleaning out images to make more room and came across this odd bug image from years ago. Do not know what it is, but it is definitely different looking. Images taken with a Sigma 150mm macro with a Canon 1.4X teleconverter on a Canon 7D. I was also using some fill light in the shadows with a flash dialed down and more diffusion added to the flash head to just give a little more light on the subject as it was under the leaf. 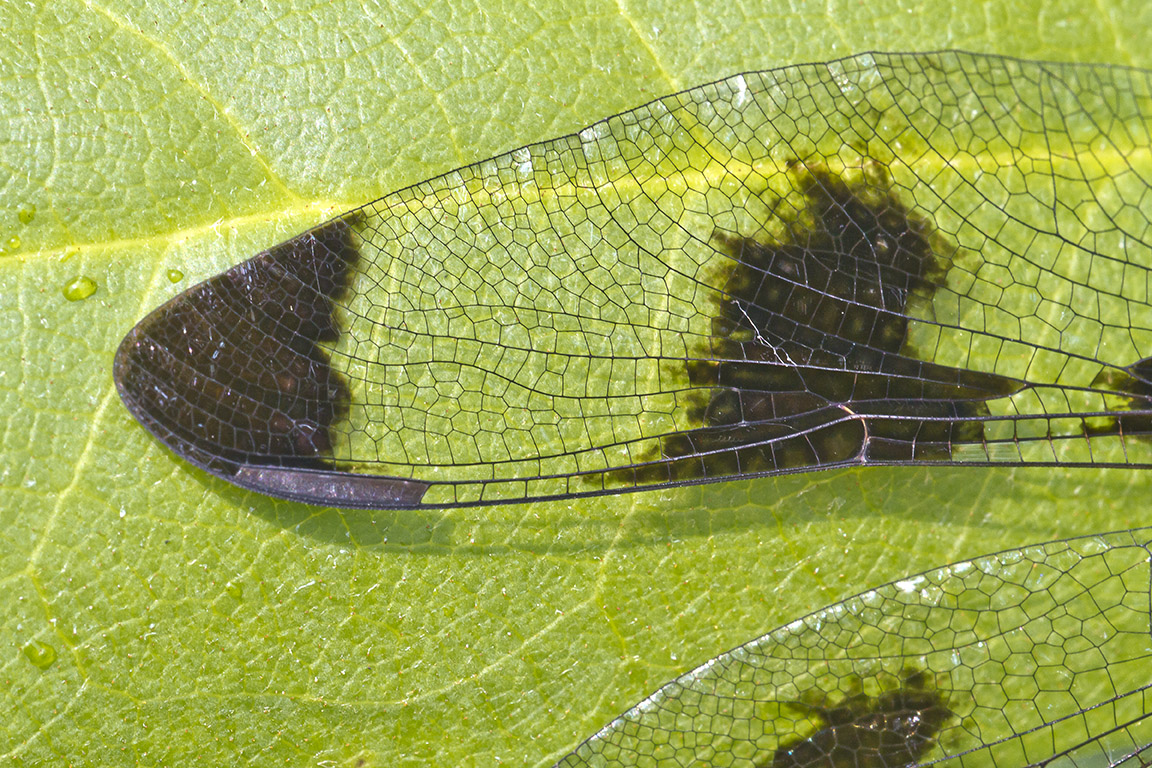 A macro shot closeup of a wing section from a female Common Whitetail Dragonfly. Image taken with a Sigma 150mm macro lens @ f/14.

This Damselfly image is made from 12 handheld images, focused at 12 different points along the body of a Female Lily Pad Forktail Damselfly. Images shot with a Sigma 150mm macro lens @ f/4 to keep the background smooth and uncluttered looking. I loaded the 12 images into one layered Photoshop and let Photoshop blend the sharpest elements from each layer together for the final image.