On our trip to the Brigantine Division of the Edwin B. Forsythe National Wildlife Refuge I had a lot of opportunities to shoot a lot of Handheld Panoramas. One of my Panoramas was the most extreme panorama I have ever tried do. For the Featured Image I had to make it fit the 1200 pixel width which I exceeded x 4 times to try to hold some of the detail in the Featured Panorama. So I also cropped the full image down to 7 sections to show the detail below. Too bad it was a rather Gray day when I was photographing this group of Snow Geese because it brightened up a little later in the day. The Featured Full Panorama Image was 56 images for an image 525 inches long x ~30+ inches high @300 ppi. The Layered file was huge and the final Flattened file was 4 Gigs. I was shooting with a Canon R with a Tamron 150-600mm lens @ 483mm , f/16. Below are 7 cropped images to show the Detail in the above Featured image.

On our visit to Blackwater NWR we saw quite a few large groups of Tundra Swans & Canada Geese, but I was looking for large groups of Snow Geese. There was one large group way out in the Blackwater River, but none close to photograph. Also saw one large group in the distance behind the Visitor Center but could not get a clear image of them from the Wildlife Drive. After driving one loop of the Wildlife Drive we stopped by the Visitor Center to photograph a large group of Canada Geese in the fields by the Center. Then off to the left of the Visitor Center I noticed a large group of Snow Geese flying in. It was still early so I liked the color of the sky behind them. When photographing multi-image panoramas of flying birds I tend to photograph them from the far end of the direction they are flying and shoot my series as quickly as I can. So if the group is flying to the right, I start my series on the far left and shoot quickly going along with them to the right to capture the whole group. If you go the opposite way you get more uneven spacing and more spacing between the birds in the group. Which is harder to touch up for the final image. The featured image is 5 images shot with a Tamron 150-600mm @600mm on a Canon R. These are about 80 – 122 inches for the original file, so making them so small in length for the post I loose some detail in the image.

Sometimes when I find a large groups of birds I try a few panoramas, just for fun. On this day I found a very large group of Snow Geese, mostly sleeping, so I thought I would give it a try.  There was not much else around, so why not. They were not moving and stretched a long ways along the Wildlife Drive. The featured image (which will probably not show much detail in this blog) was 35 images, handheld, for a finished panorama of 550 inches long by 15.5 inches high. It took Photoshop quite a while for it to process the panorama and then I had a few touch-ups here and there because of the length. I was trying a new Canon R with a 400mm f/4 D.O. lens and 1.4X teleconverter. It was not very bright out so I should have raised my ISO and stopped down more for increased depth of field, but I thought it might be enough when I photographing them. So the foreground is a little soft, but it was still fun to try. 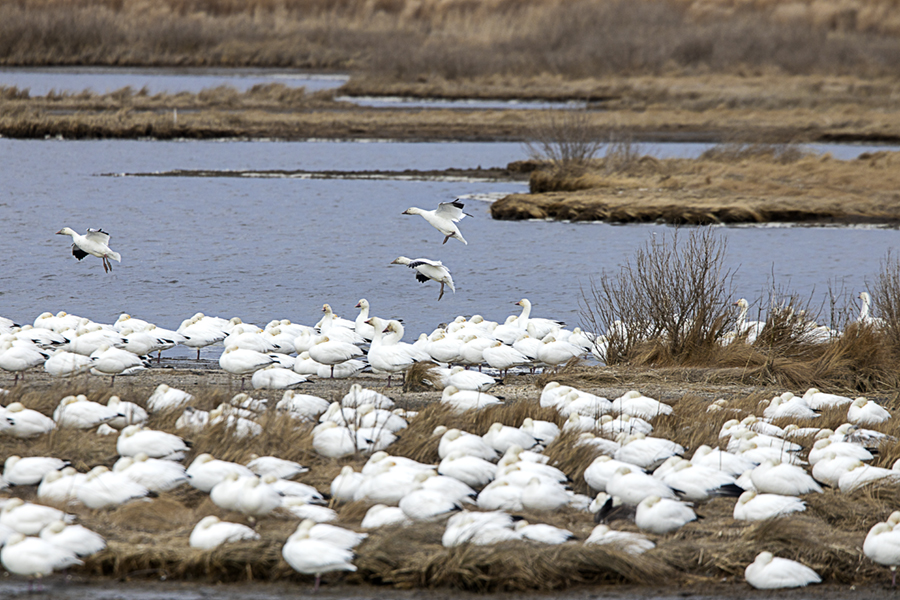 Image taken later when they started to move around. Single Image showing limited depth of field on foreground because I was focusing on the flying birds landing in background. 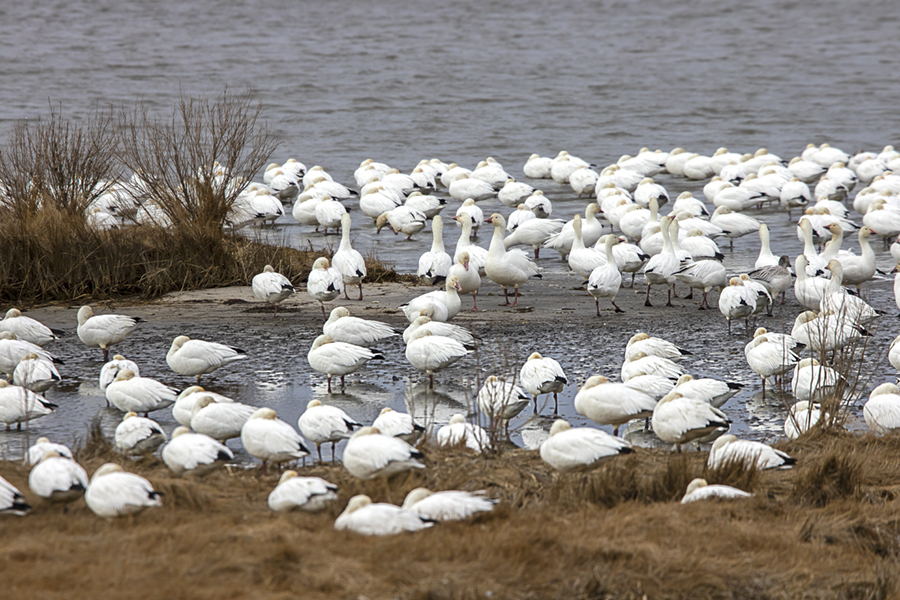 Starting to wake up and move around