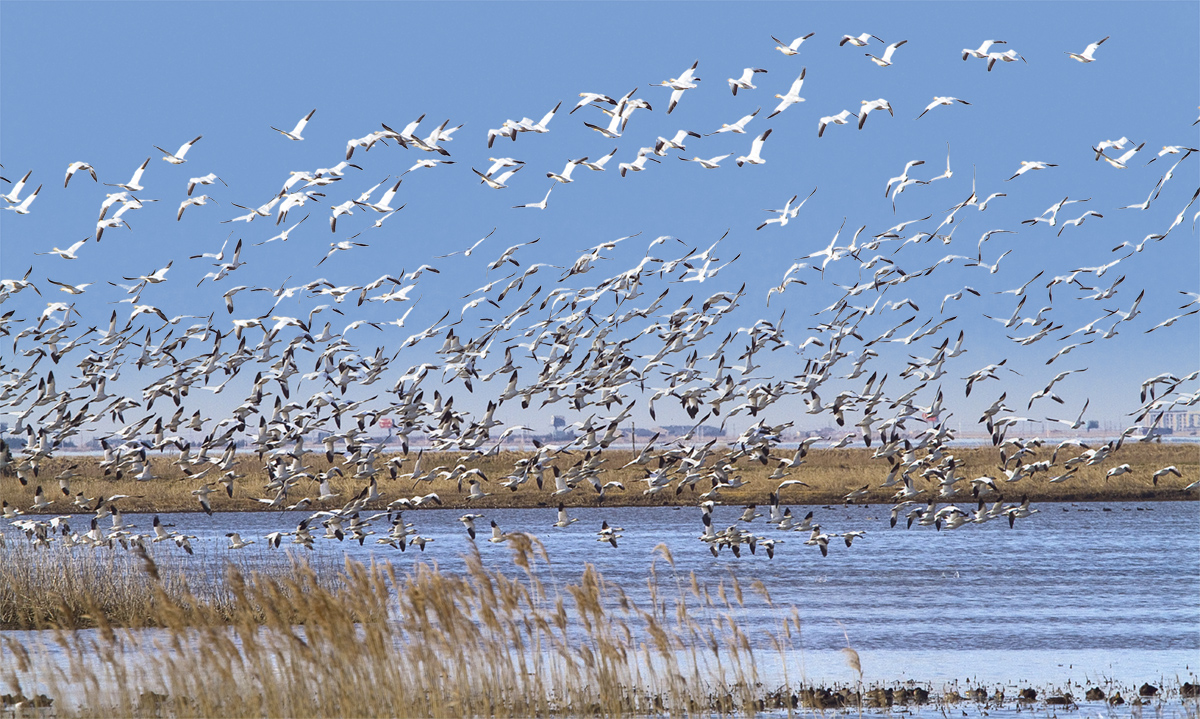 The Brigantine Division of the Edwin B. Forsythe National Wildlife Refuge usually has a large amount of Snow Geese in March so it is fun to photograph the large groups of them especially in flight. On this visit I was on the Wildlife Drive looking at some small birds down by the water. A large group of Snow Geese took flight a little ways from where I was on the Wildlife Drive and were flying towards me. This image was taken as they were flying by me and then reversed direction and went back from where they took off. 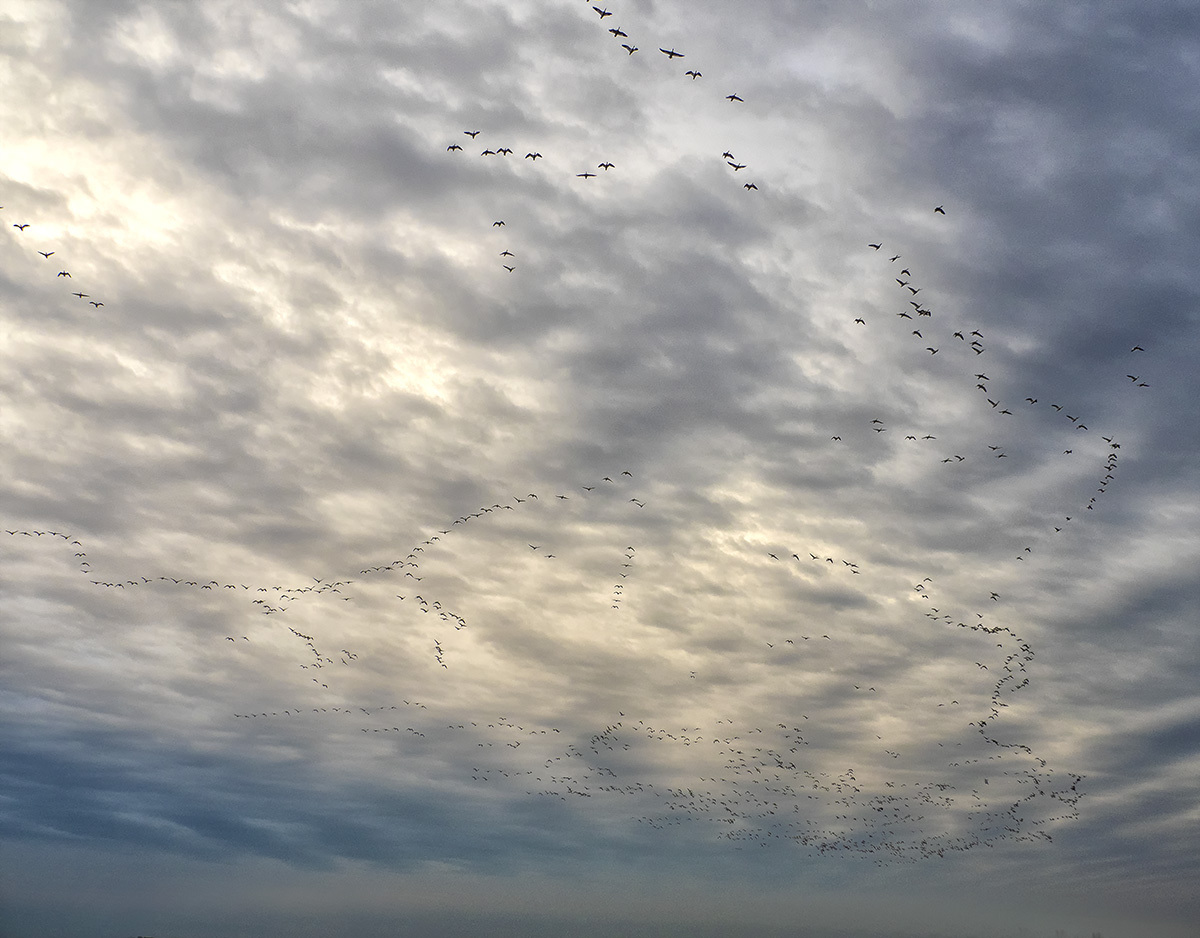 On a trip a few years ago to the Brigantine Division of the Edwin B. Forsythe National Wildlife I noticed this flock of Snow Geese flying high above me. I took a couple of images but because the Geese were so high above me it did not look that interesting. Then I decided to shoot a quick 2 image series for a panorama to show a wider view of the flock of Snow Geese flying in the interesting clouds above. I was using an Olympus OMD 1 with a 14-140mm lens @ 14mm. The panorama was assembled in Photoshop, letting Photoshop align & blend the Panorama.

On our visit to Blackwater NWR we saw quite a few large groups of Tundra Swans & Canada Geese, but I was looking for large groups of Snow Geese. There was one large group way out in the Blackwater River, but none close to photograph. Also saw one large group in the distance behind the Visitor Center but could not get a clear image of them from the Wildlife Drive. After driving one loop of the Wildlife Drive we stopped by the Visitor Center to photograph a large group of Canada Geese in the fields by the Center. Then off to the left of the Visitor Center I noticed a large group of Snow Geese flying in. It was still early so I liked the color of the sky behind them. When photographing multi-image panoramas of flying birds I tend to photograph them from the far end of the direction they are flying and shoot my series as quickly as I can. So if the group is flying to the right, I start my series on the far left and shoot quickly going along with them to the right to capture the whole group. If you go the opposite way you get more uneven spacing and more spacing between the birds in the group. Which is harder to touch up for the final image. The featured image is 5 images shot with a Tamron 150-600mm @600mm on a Canon R. These are about 80 – 122 inches for the original file, so making them so small in length for the post I loose some detail in the image.

I was cleaning out old BackUp Drives and found this image of an early am Snow Geese Take-Off at the Blackwater National Wildlife Refuge near Cambridge, Maryland. This was taken 2 days after Christmas in 2007. It was early in the morning as I was setting up my camera & tripod, hoping for a mass Take-Off of the Snow Geese. I was using the 13 lb Sigma 300-800mm f/5.6 lens @ 300mm on a Canon 1D mkII. It takes a while to get this large zoom lens setup on the tripod with a Wimberly Gimbel head. And luckily I got setup before they had a mass take-off. 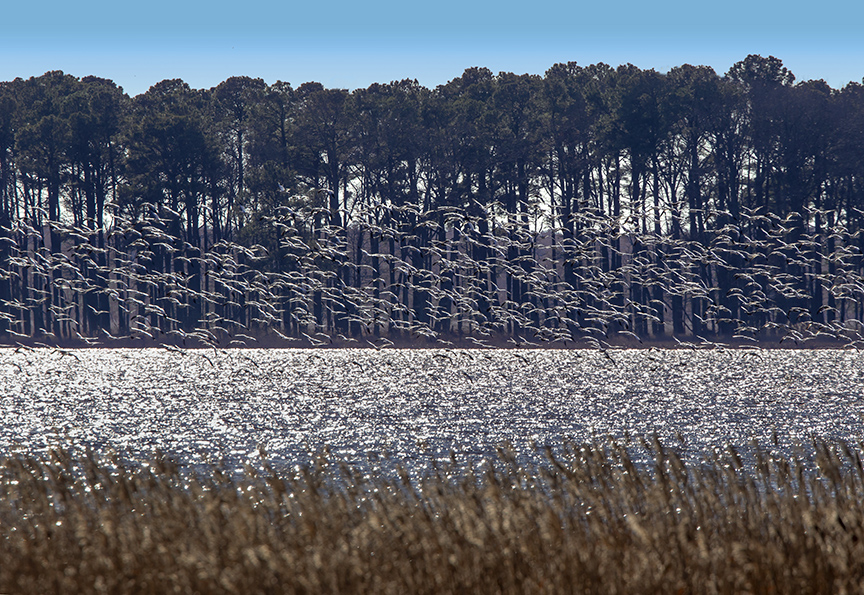 This large group of Snow Geese was flying in a long & low to the water flock of birds. The white Snow Geese overlapping the bright sun lit water really blended in with the bright water, but I thought it was still an interesting image. Image from Blackwater National Wildlife Refuge a few years ago. Shot with a Canon 400mm DO lens with a 1.4x teleconverter.

On our weekend at Blackwater National Wildlife Refuge, I like photographing the great landscapes and also the birds and wildlife, plus detail images I find interesting. On the first day the weather cooperated and I got a lot of images to go through. As I was photographing the large groups of Snow Geese, Tundra Swans and Canada Geese in the water, I wondered if multi-image panoramas shot with long lenses would work on the large groups of flying flocks of birds. You could just use a wide angle lens, but that would not be a very large file. And for a long flying group you would have a lot of blank blue sky on the top and bottom.

So as large groups flew by, I would shoot a series of the flying birds, panning as quickly as I could, to try to capture the whole group. I could not use a tripod and just shoot the same spot in the sky as they passed because the sky & clouds would be in the same place with different birds. I was using a Canon 400mm f/4 DO lens with a 1.4x teleconverter. So at 10 FPS I got quite a few frames of each group as they flew by. Then I chose the best frames for overlap and manually lined them up for position. Then retouched some overlap wing positions or birds that overlapped.

The featured image is made from 4 images of the series I shot on the first day. The first day was a beautiful day with nice blue skies. I manually lined up the images, blending them in Photoshop and touching up a few overlaps.

The 2nd Image is 5 images shot on the 2nd day which was more overcast and kind of a gray day. Again manually lining up the images in Photoshop and blending them together. I had tried to automatically let Photoshop CC2019 align the layers but it could not because of all that was going on with the birds. These final images are between about 80 inches and 110 inches long. I probably would not print them but I know it sort of works. 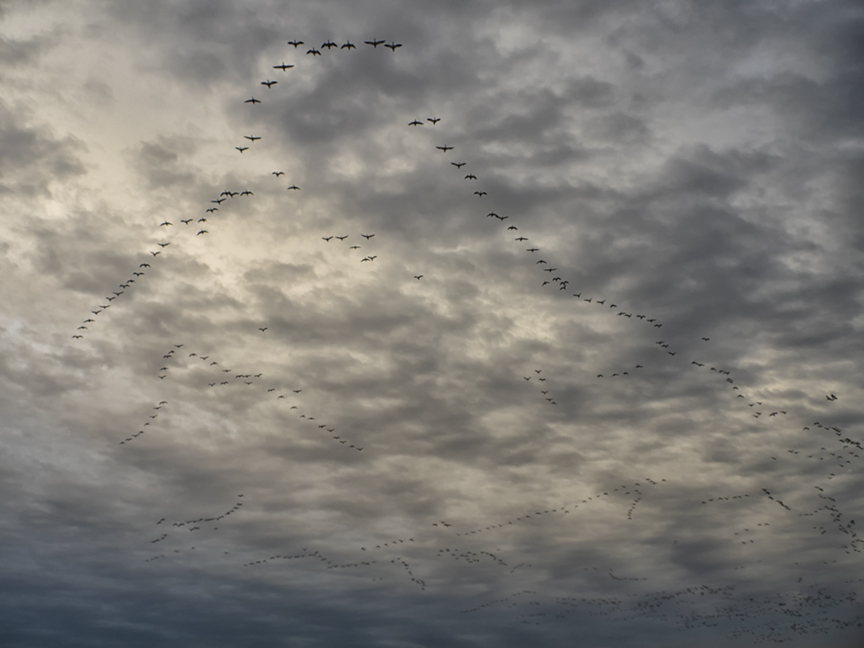 We went for 2 days to photograph at the Blackwater National Wildlife Refuge in Cambridge, Maryland. Early in the morning, along the Wildlife Drive on the second day we saw a huge flock of Snow Geese flying out under a heavy cloud cover. They were quite high and took a few minutes for the waves of them to pass by. Probably 500 to 700 (or more) passed by in multiple waves. 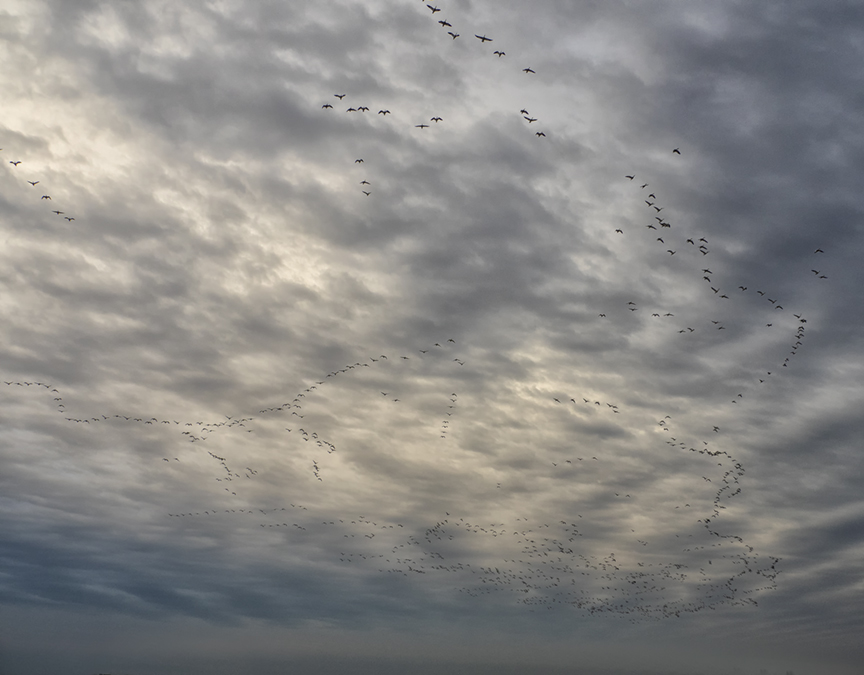 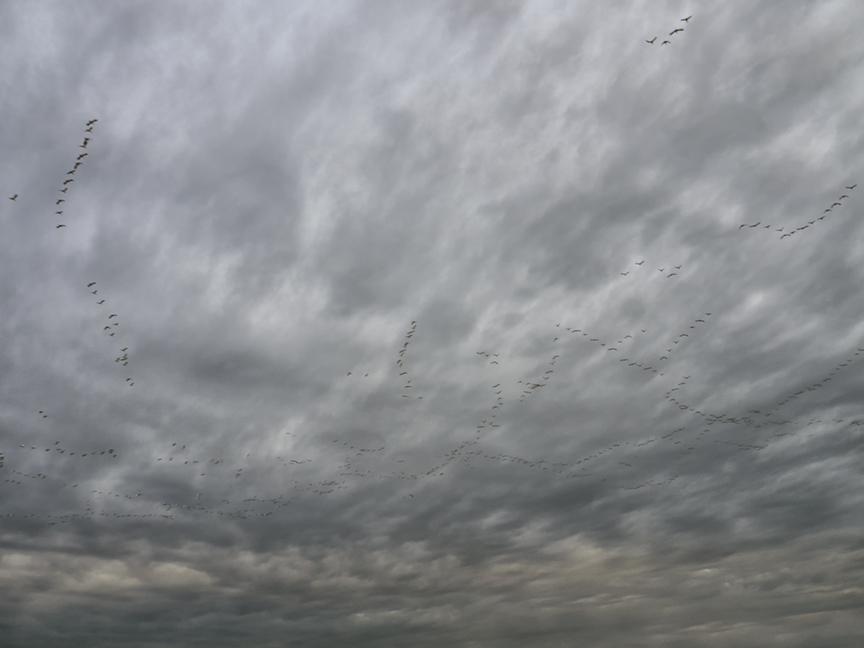 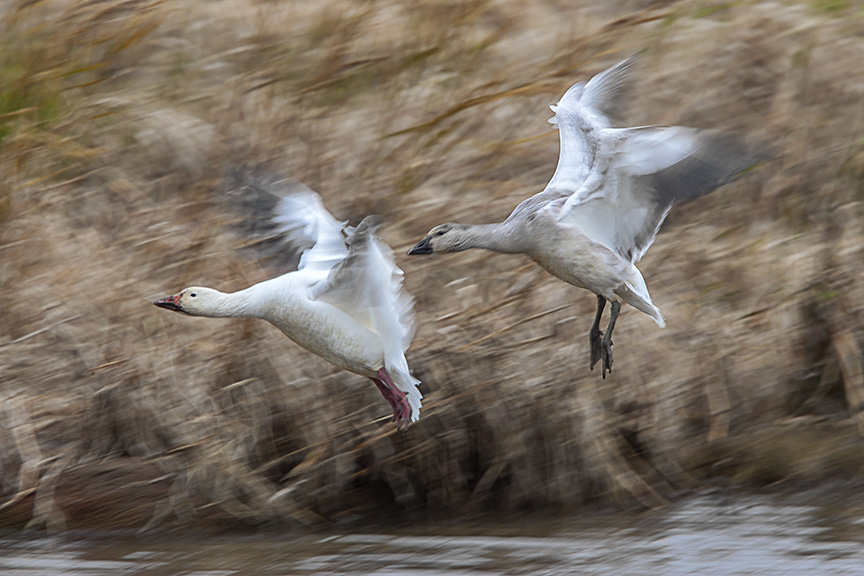 These Snow Geese were coming in for a landing early in the morning. In the early morning, the light was not great, so I was using a slower shutter speed than I usually like. I liked the blur on the moving wingtips because of a slower shutter speed but was fast enough to keep their bodies fairly sharp. It seems to give the sense of movement with the blurred wing tips. 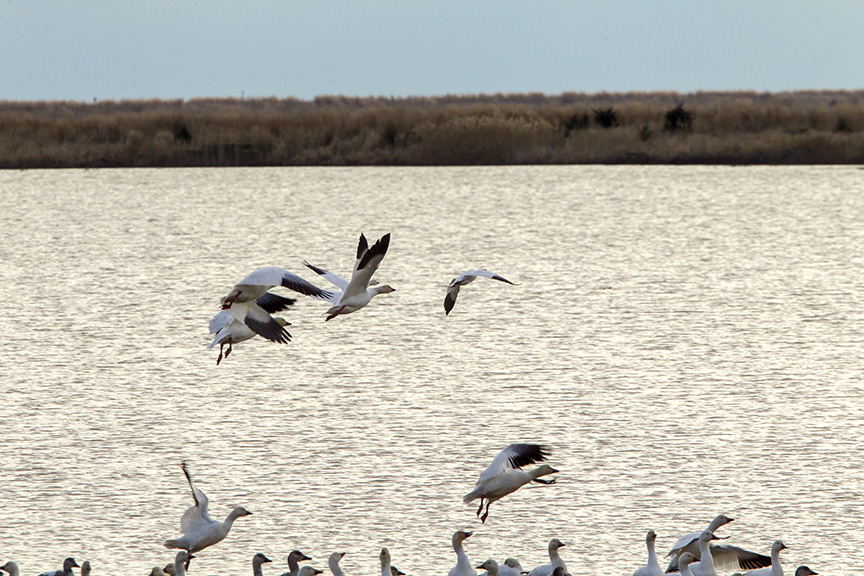 Snow Goose Coming At You 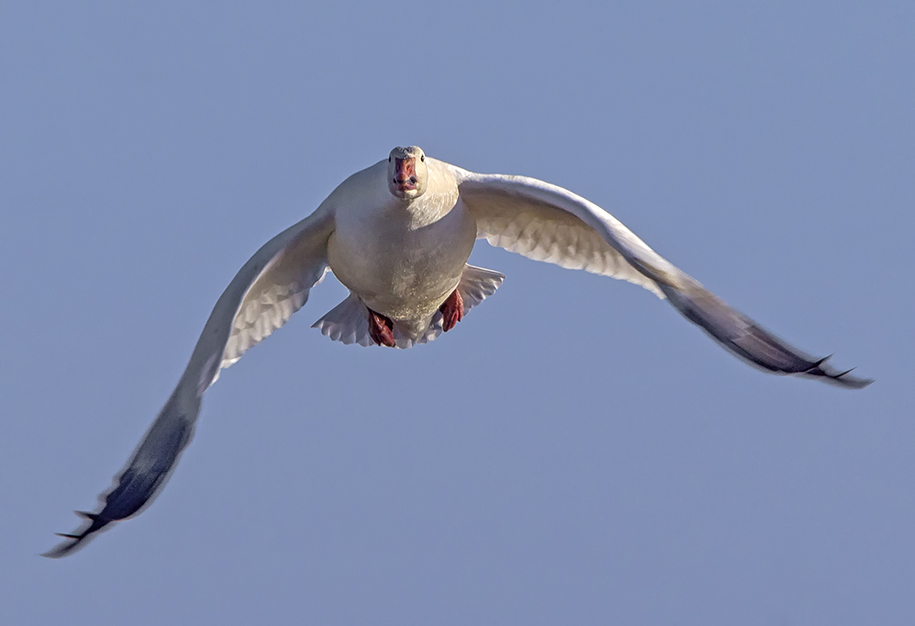 When we were at the Edwin B. Forsythe National Wildlife Refuge in NJ, we were looking for Snow Geese. We were glad to see huge numbers of Snow Geese there in multiple  locations. I waited for large groups taking off, but they seemed content to just make a lot of noise squawking away.

We did see a few small groups or single geese flying around and even coming right at us, like the featured image.

It was still fun to see large groups in the distance covering a large area, even though we missed the large takeoffs. 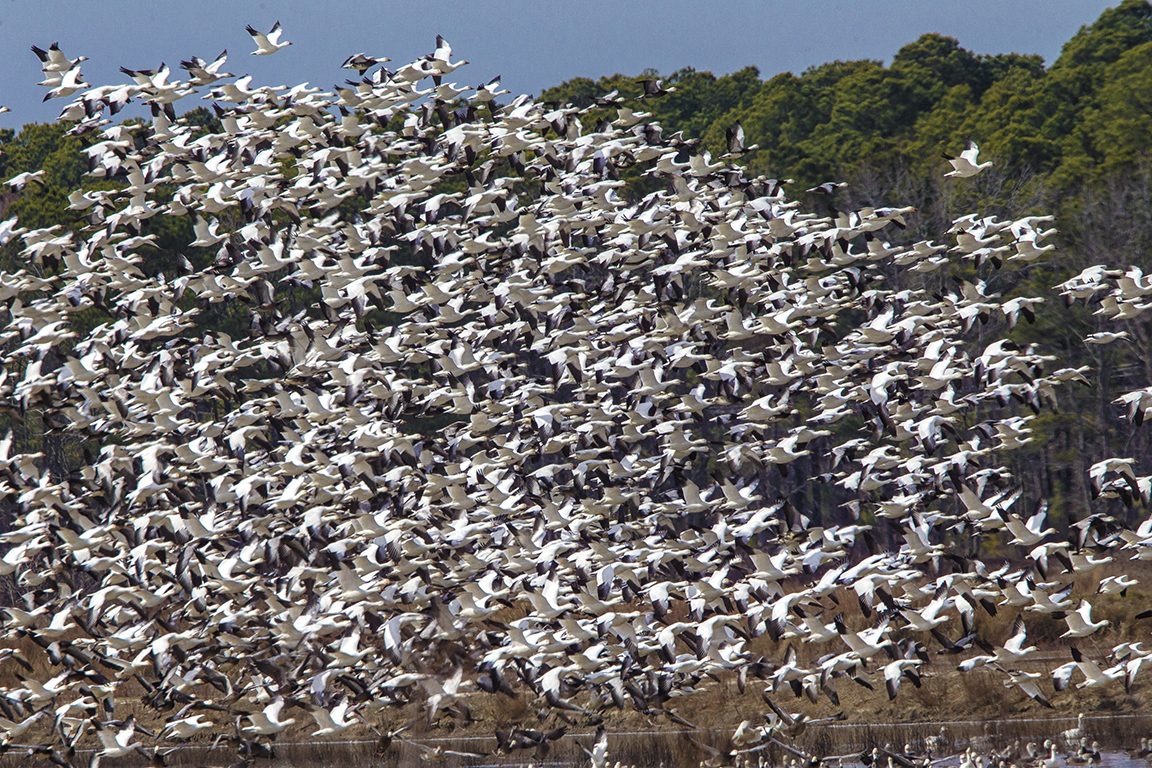 After we had gone to the Blackwater National Wildlife Refuge in Maryland, work got busy and I did not have time to go through the images I shot there. Catching up on my personal photos I found quite a few to post. These are Snow Geese from the end of February. They kept taking off in mass, making a loop and landing. 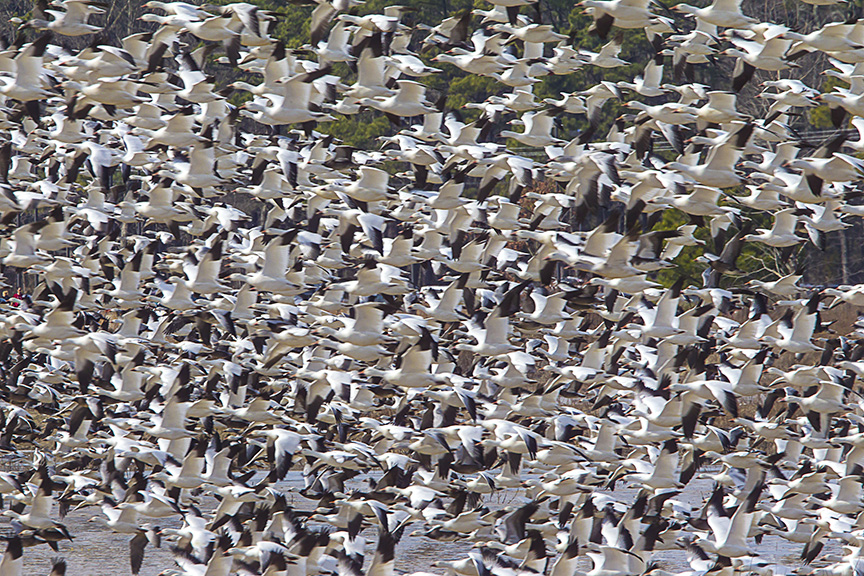 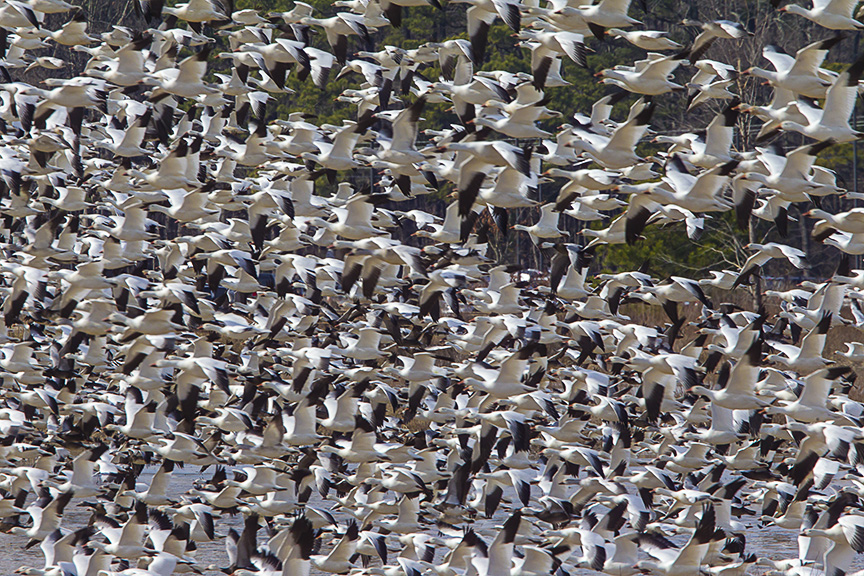 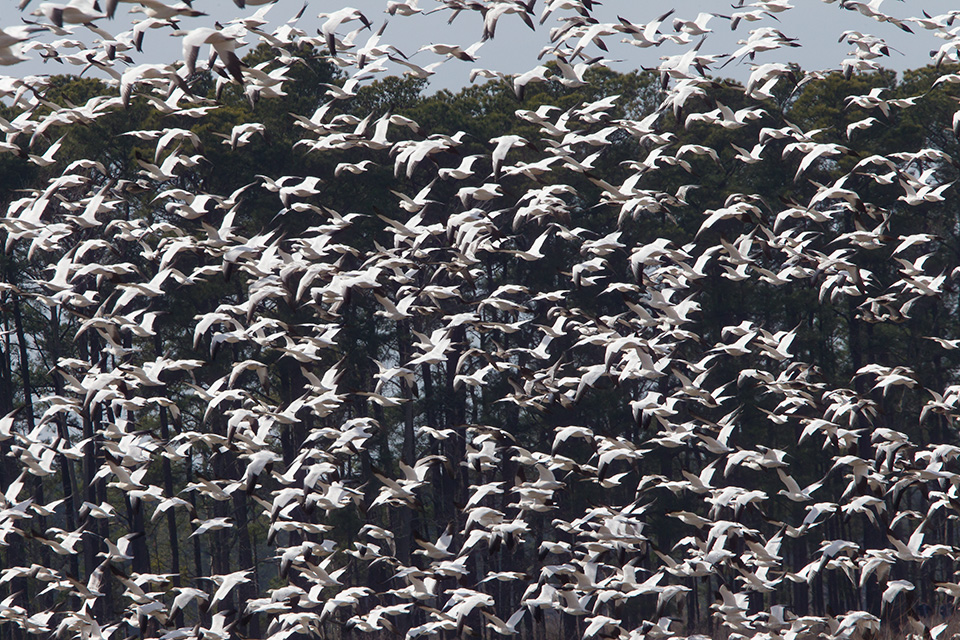 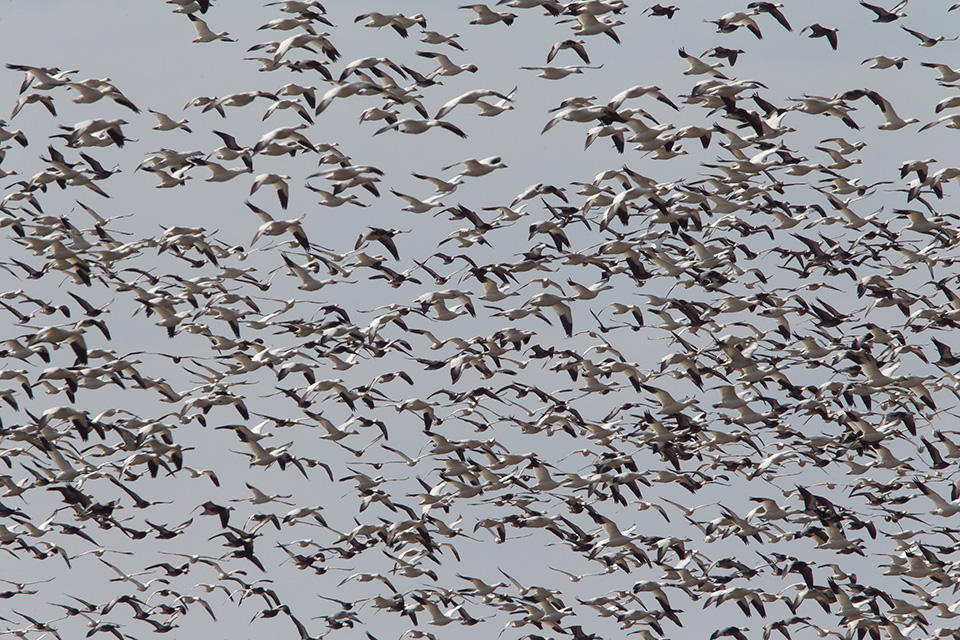 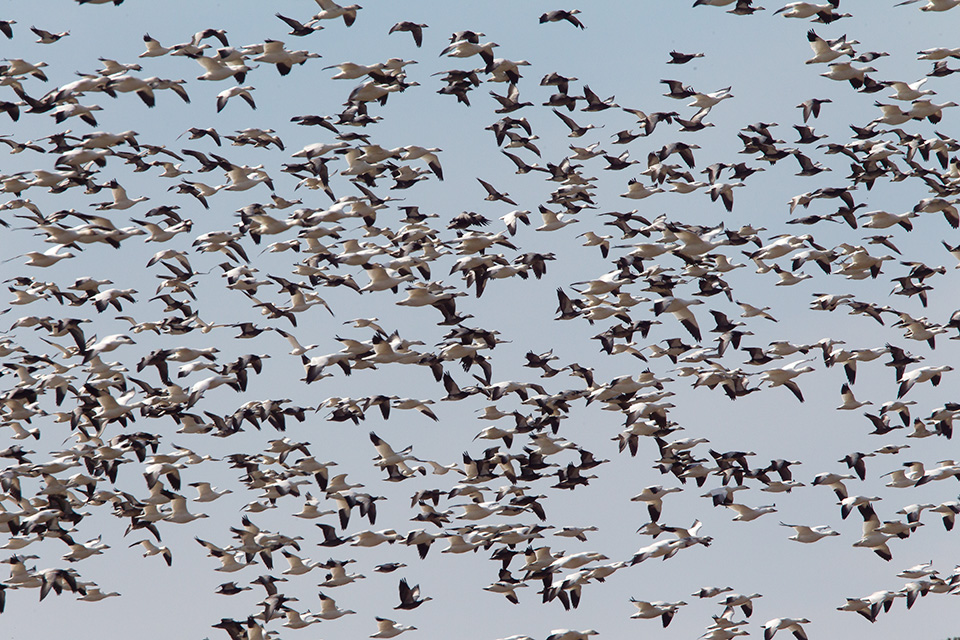 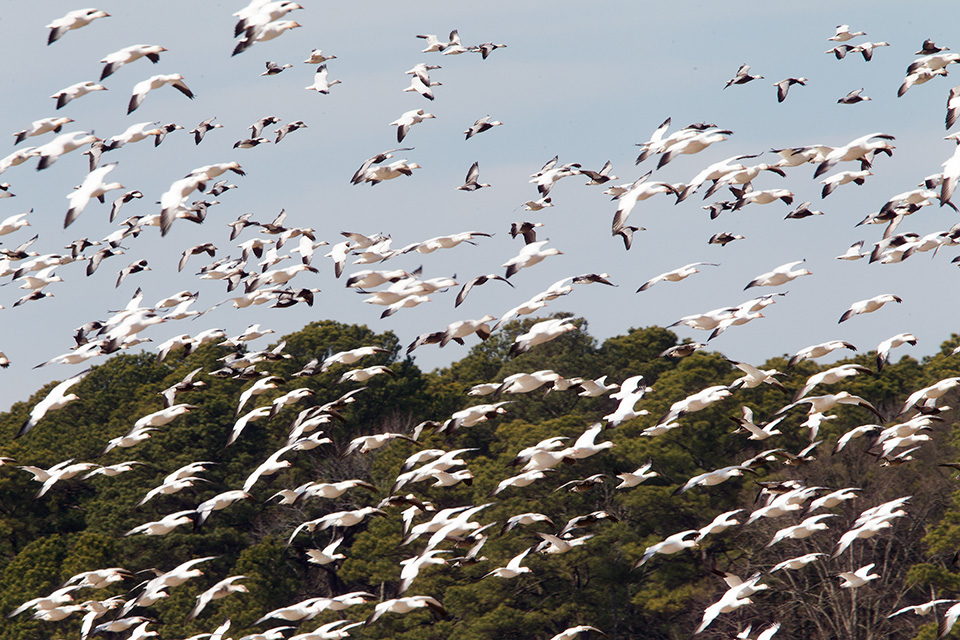 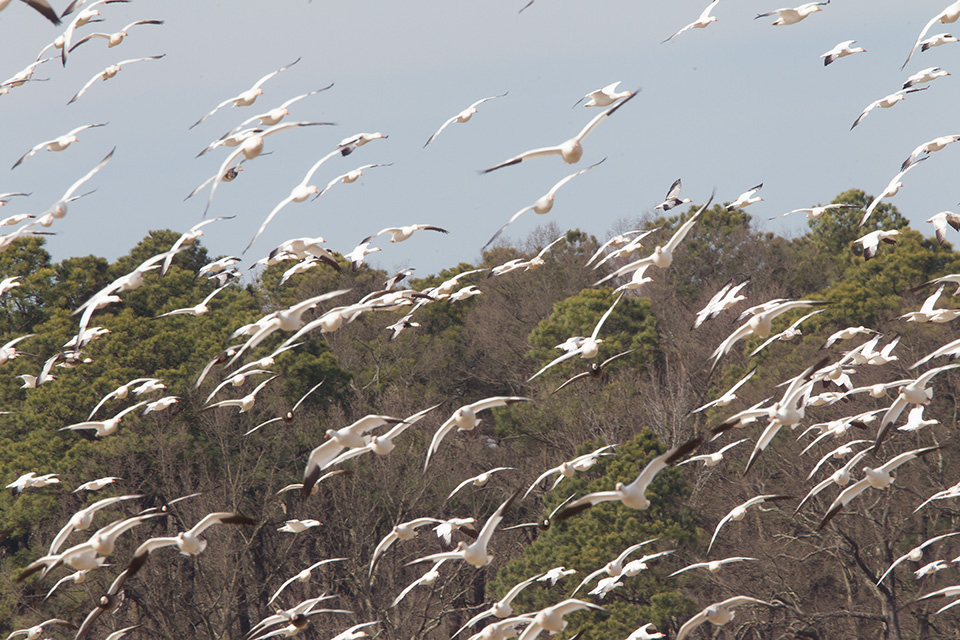 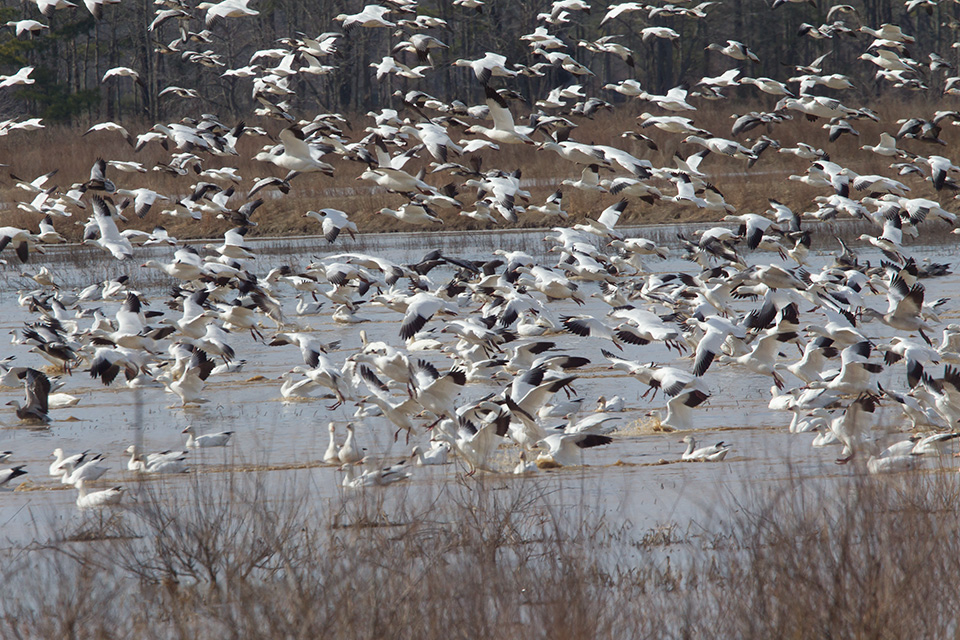