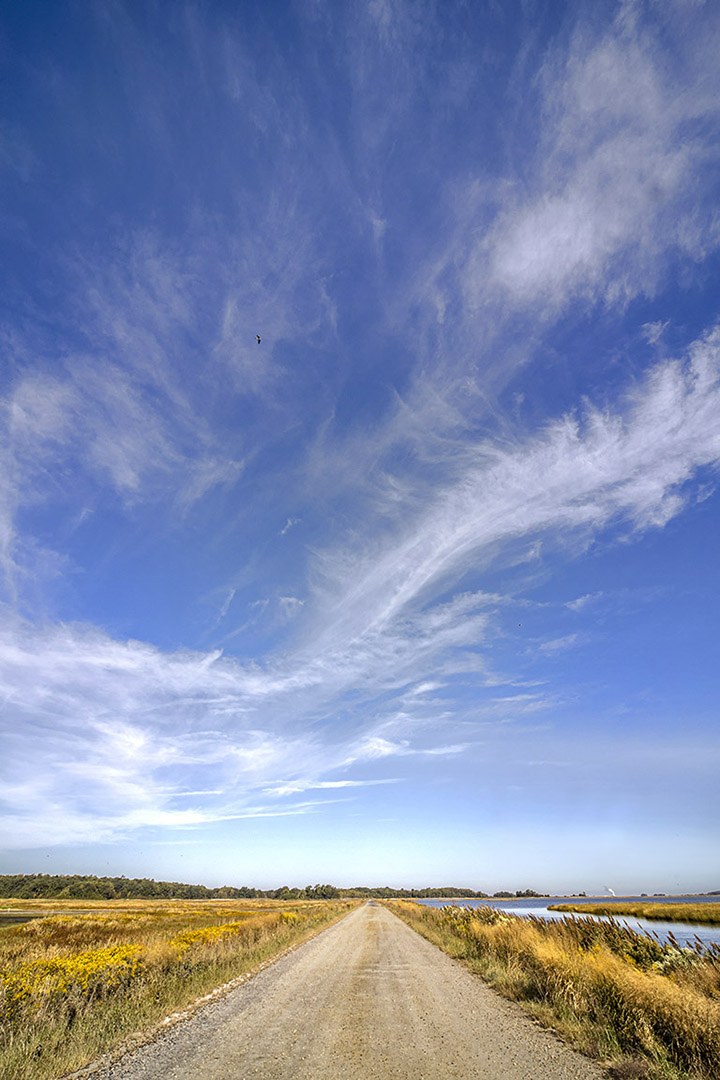 Here are a series of landscape & cloudscape images from a recent visit to Bombay Hook National Wildlife Refuge in Delaware. The featured image was shot @ 14mm along the Wildlife Drive. 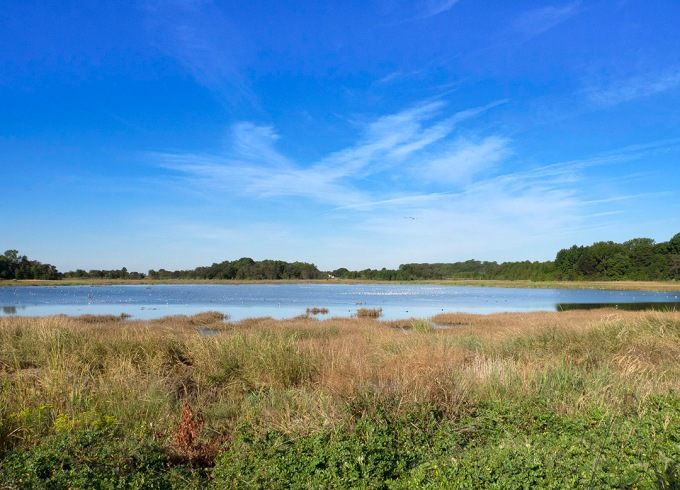 Here are a few panoramas from the Blackwater National Wildlife Refuge in Cambridge, Maryland. The featured Sunrise image is a panorama image made with 5 horizontal overlapping images, each shot at 24mm and assembled in Photoshop. This is an image of the Little Blackwater River along the entrance to the Wildlife Drive. The final size for the featured sunrise image is 95 inches long x 18 inches high @ 300ppi. Sunrises & Sunsets are usually very colorful at the Blackwater National Wildlife Refuge which is one of my favorite photo destinations.

Blackwater NWR Sunrise across from the lookout platform along the Wildlife Drive. ( 2 image Pano)

Image below is a multi-image vertical panorama. Sometimes it is fun to try different format orientations instead of ones you usually see. Most panoramas are Horizontal.

We went to one of my favorite small Natural Areas that was close to where we used to live. The clouds were impressive so I shot a series of panoramas @ 17mm with a Canon 17-40mm lens and 12mm with a 12-24mm lens on a Canon R. I was mostly shooting with the Hoya R72 InfraRed Filter, but did a few without the R72 filter also.

The images below show the series of panorama images going from the raw image as shot with the Hoya R72 InfraRed filter, then the image balanced to the white card I also shot for color balance. Then going to the grayscale B&W Image.

While we were at Blackwater NWR, I enjoyed shooting some landscapes besides the usual wildife.  The featured image was on the morning of the second day there, by the entrance to the Wildlife Drive by pool 1. I was using a 12-24mm zoom lens @12mm. This image is a multi-image blend for the effect I wanted to capture. One exposure for the brighter sky and sunburst and others for the darker water and foreground. For the sky I was shooting @ f/22 to get a dramatic starburst on the sun. Then I opened up and shot a few bracketed shots for the darker water and ground so I could choose the areas I needed to use to blend into my final image. Then aligned them all in Photoshop and blended the series with soft masks. Depending on the lens or camera format I am using and the strength of the starburst I want determines what f/stop I use to get the final shot. It is usually f/11, f/16 or f/22.

We got to where we wanted on the Wildlife Drive to photograph the setting sun, but it was not as dramatic as we had hoped for. It was still fun to photograph and got a few good images. Then we moved a little closer, around the bend towards the straightaway to the exit. These are combinations of exposure  blends for darks & lights for shadow detail and bright detail along with multi-images for size. I was using 2 cameras, one with a 24-105mm, the other with a 12-24mm. The featured image is at 105mm (5 images, blended). If you see any specks in the sky, they are birds flying through. After the sun went below the horizon we then headed back to the motel to rest up for sunrise the next day. 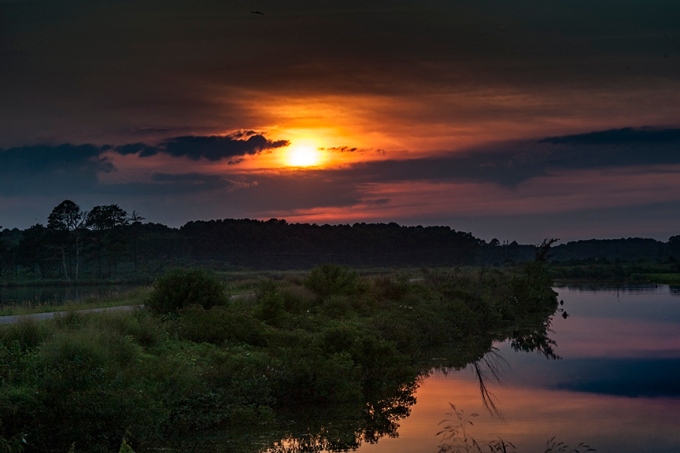 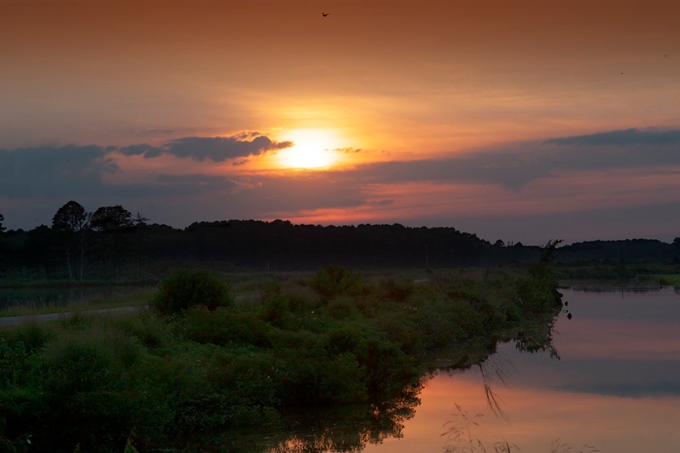 The featured Sunrise image is a series of horizontal images stacked vertically to get more of the colorful clouds and sky at sunrise. Five images shot at 12mm, aligned and blended together manually in Photoshop with soft edge masks. This view is not far from the entrance on the Wildlife Drive looking out over The Little Blackwater River.

The image below is around the corner from the featured & above image, by the Observation Platform, looking out at the Blackwater River.

When we were going to the Blackwater National Wildlife Refuge, we planned for the first day to include the sunset and the second day to be there for the sunrise. Usually they are very dramatic and colorful at Blackwater NWR. Normall we go to the end of the Wildlife Drive for sunsets and the beginning of the Wildlife Drive for sunrise. The sunrises are better on the Little Blackwater River. While the sunsets are better by the Blackwater River. While we were on the Wildlife Drive heading for the far end, we noticed and liked the colorful clouds on the Blackwater River so we stopped and shot a few panoramas as the sun was getting lower. Even with 12mm or 24mm lenses, it still did not give me all I wanted in my shots. So I shot a series of images handheld, to blend together to get the view I wanted. The featured image was a series of shots in a vertical format to blend together. I wanted to include more sky and reflections in the water. The image below was a series of images shot horizontally to blend together.  With 12mm or 24mm lenses it seems like you have to shoot the images with a lot more overlap on each image than with longer lenses. Also instead of using Photoshop to automatically align and blend the images, they come out better to manually align each image manually and make soft edge masks to blend together for the final image. Photoshop tends to really distort the few images on each end and distort the edges badly, especially the extreme images on each end. The clouds and reflections then look really distorted and warped.

We went to the Blackwater National Wildlife Refuge outside of Cambridge, Maryland to see what subjects we could find to photograph. These images were taken along the Wildlife Drive. The Eagles were scarce, only saw a few in the distance, but we kind of expected that. But in the Winter months Blackwater has one of the highest numbers of Eagles in the Northeast. So we were concentrating on Dragonflies, other birds, panoramas and sunrises & sunsets. The featured image was 4 Horizontal shots @24mm, assembled in Photoshop. With wide angle lenses for panoramas, I tend to overlap more than when using long telephoto lenses. The wider the focal length the more overlapping shots I do. These images were shot on or near the long Observation Platform along the 4 mile Wildlife Drive. The above featured image was 4 horizontal shots @ 24mm. On the right side of the featured image you can see part of the Observation Platform. These images were taken with the Canon 24-105mm lens or the Sigma 12-24mm lens. The Blackwater NWR includes more than 28,000 acres of tidal marsh, mixed hardwood and loblolly pine forests, managed freshwater wetlands and croplands. The Blackwater & Little Blackwater Rivers flow through the refuge so I guess that is where they got the name Blackwater NWR. 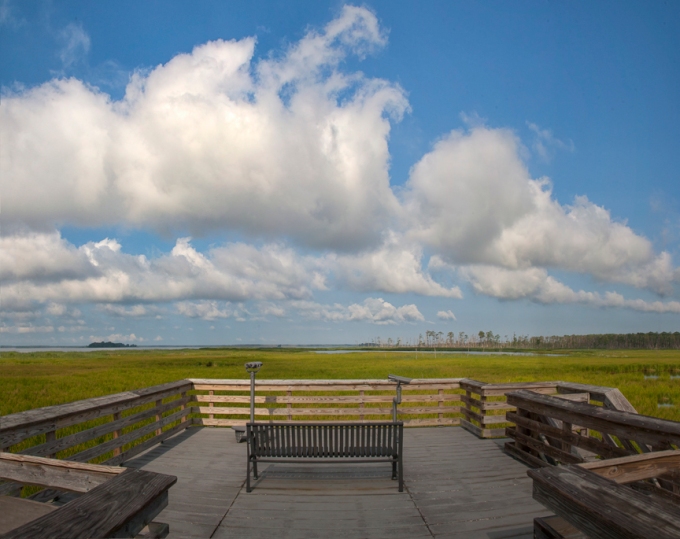 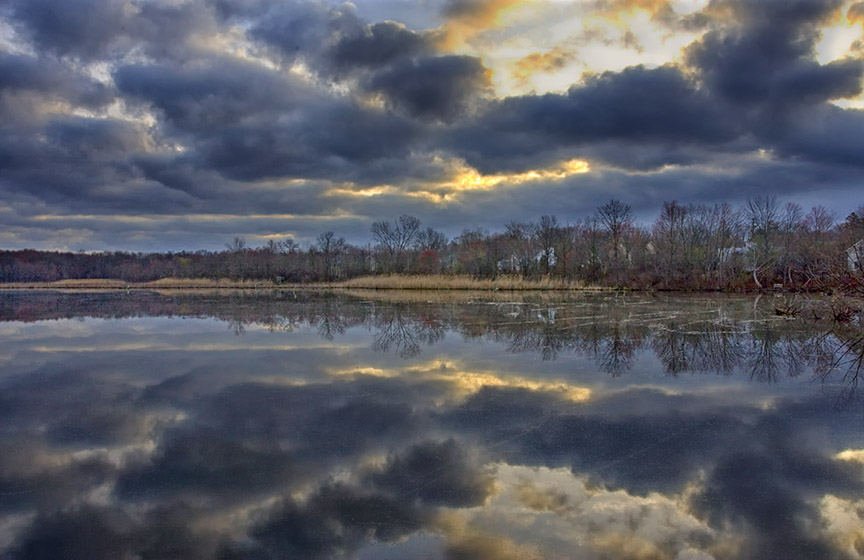 Another sunrise with heavy cloud cover. This time I used a Sigma 12-24mm and shot @22mm. This was shot a while ago and I finally got around to working on my images from that day. Work sometimes gets in the way. Again this was taken at the Celery Farm Natural Area in Allendale, NJ.

While we were at the Wildlife Refuge, I was looking along the Observation Platform to see if I could find something interesting to photograph. As I was walking down, I looked back and thought the platform itself was interesting. Plus I had a fairly Dramatic Sky to work with. Then I tried a series of effects in Photoshop, blending color and monotone into 1 image. If nothing else it kept me amused for a while trying different colors, tones, masks & combinations together. Plus it was fun to see different effects and how they work together. 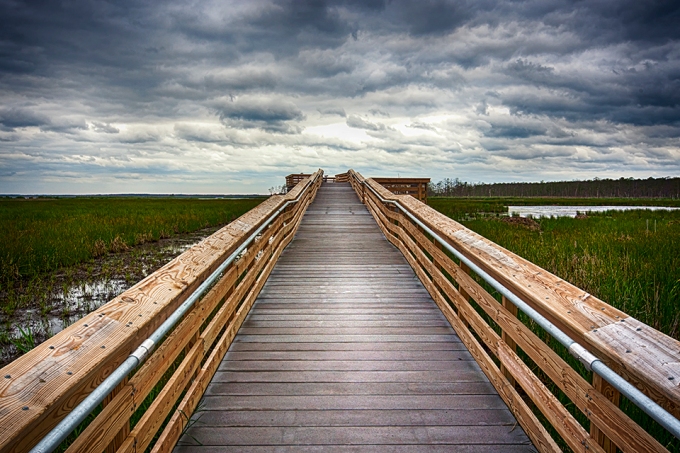 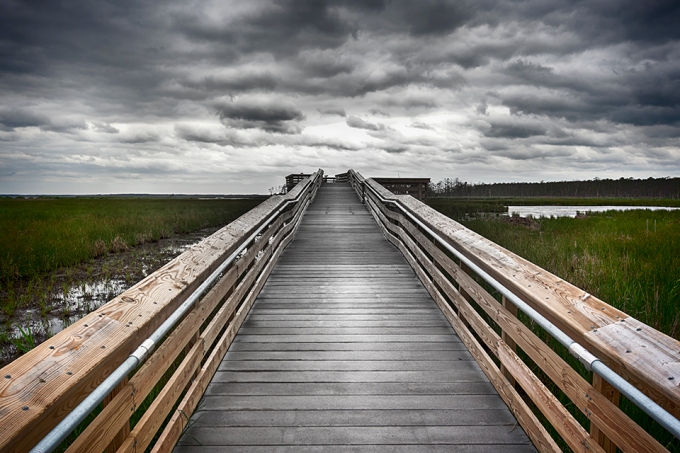 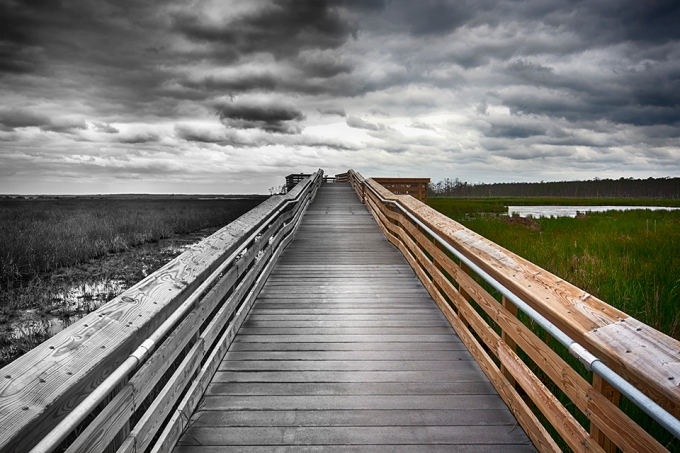 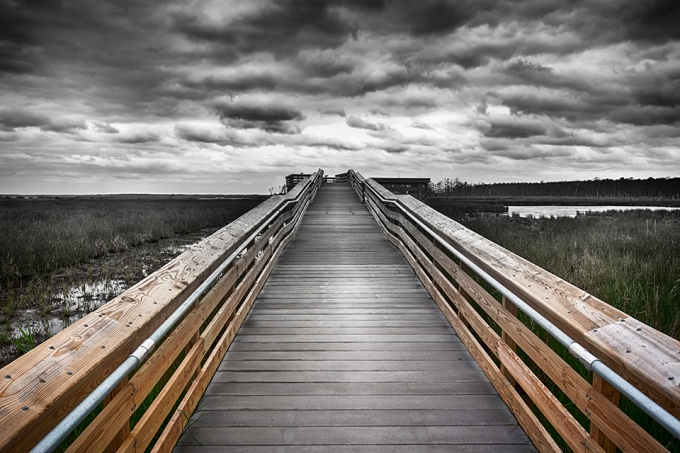