The Eagles seemed to be enforcing the Closed Road, manning the checkpoint! They liked sitting on the barricade. Throughout the day we were there we saw a few different Eagles sitting there.

Here are some more Bald Eagle images from a previous trip to the Blackwater National Wildlife Refuge in Maryland. It is a wonderful location for photographing Eagles. The number of Eagles increases in the colder months so there are more opportunities to get Eagles flying by.  All images shot with a 400mm DO lens with a 1.4x teleconverter. 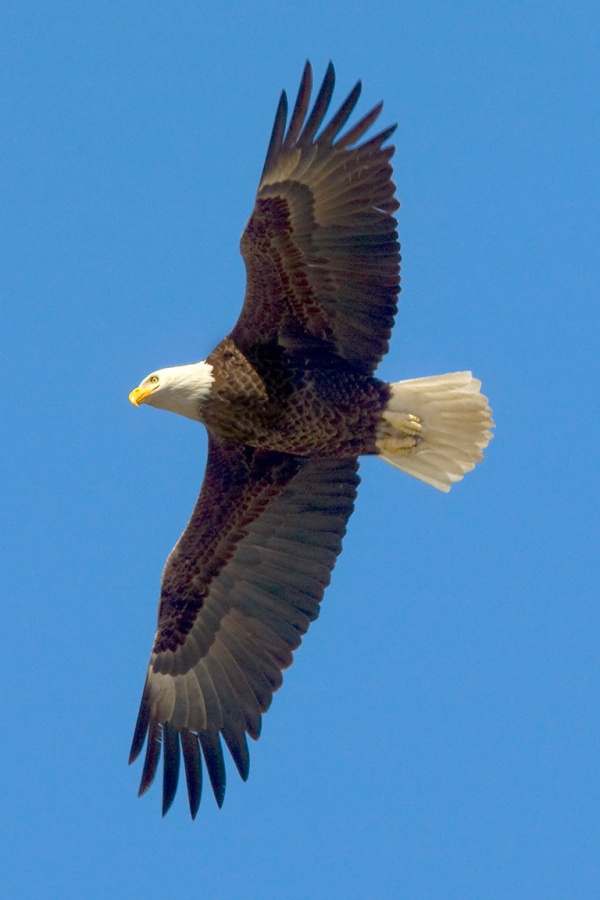 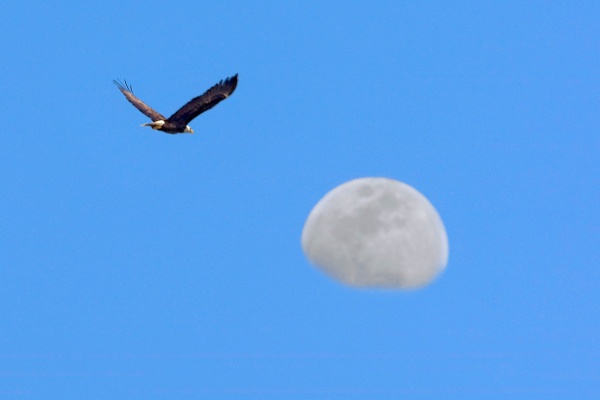 I am going through my array of backup hard drives to cleanup and remove unnecessary files and make more room to add files. Also to go through and see what sessions I my not have worked on. I was surprised to find this image of a Bald Eagle from many years ago from a trip to the Blackwater National Wildlife Refuge in Cambridge Maryland. It flew out of a tree along the Wildlife Drive. I was photographing a different view when I noticed this Eagle fly out of a tree on my side. So I quickly tried to get a shot but just managed to lock on to get this image in focus. I was shooting verticals so I did not have time to change orientation before it changed direction. I have learned that photographing Eagles tail views are not my favorite images. Eagle image shot with a Canon 400mm Canon DO lens with 1.4x Teleconverter on a Canon 1D MkIII Camera body.

Near the exit of the Wildlife Drive at the Blackwater National Wildlife Refuge I was looking for photo subjects in the fields. Then this Immature Bold Eagle flew in and landed giving me a few more images on our way out. 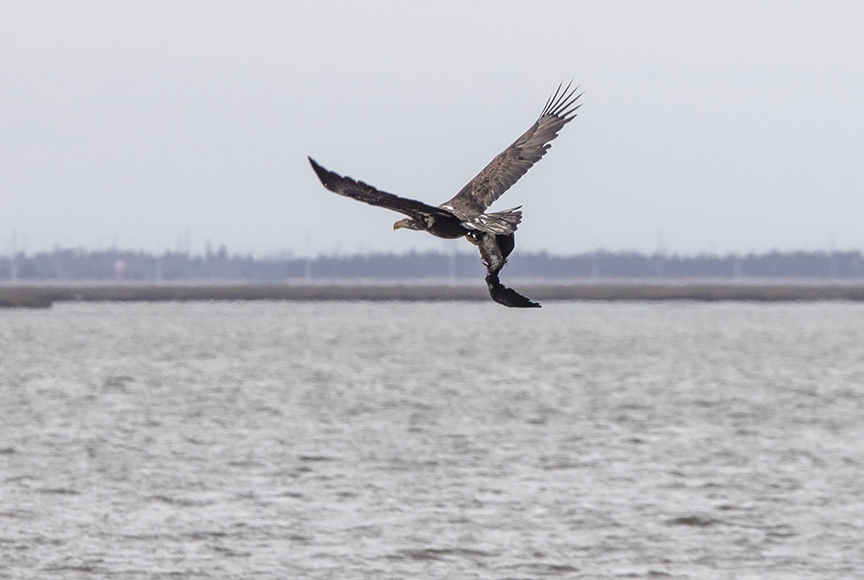 While we were photographing Ducks & Geese in the water along the Wildlife Drive at the Edwin B. Forsythe National Wildlife Refuge, Brigantine Division, we noticed this large dark bird along the far shoreline that had just landed. I thought it might be an Immature Bald Eagle because of the large size and dark coloring. I shot quite a few series of this bird as it flew short distances along the far shoreline and it kept moving farther & farther down the shoreline, landing multiple times along the way. When I got a chance to work on my files I remembered this series and started to work on the Raw files. I was using a Canon 400mm DO f/4 lens with a Canon Series III 1.4X Teleconverter so for that distance away the bird was extremely small in the frame. First I opened the Canon R raw files as 54MP, instead of the standard 30MP. I did this to get a little more pixels to work with since the Eagle was so small in the file and bumping up the faux pixels when opening in Camera Raw sometimes still retains more detail. This helps to get an image somewhat usable with a little more pixels, be it they are faux pixels. These are extreme (Very Extreme) crops so the quality is not great, but it is fun to see it was an Immature Bald Eagle with what looked like a Duck in its talons. It made its way up the shoreline, stopping multiple times for a snack on the way. We were on the Wildlife Drive (so we were quite far away) and these are just a few images from the series as it was working its way down the far shoreline. 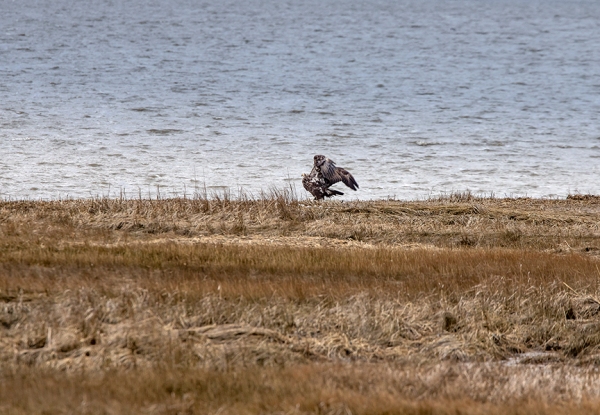 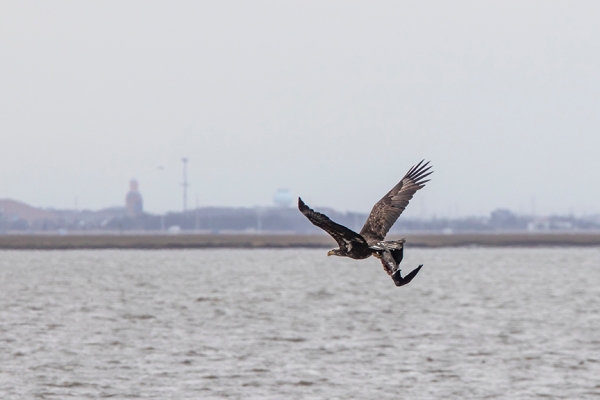 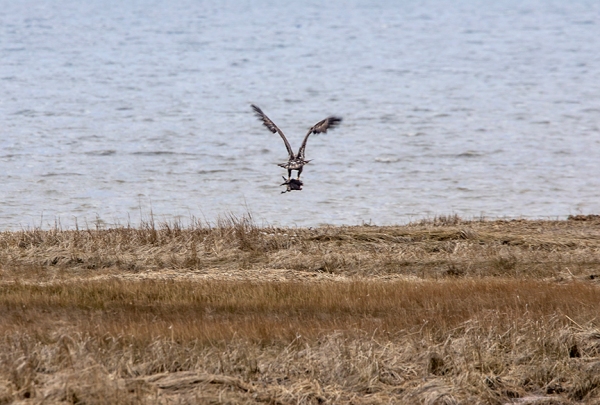 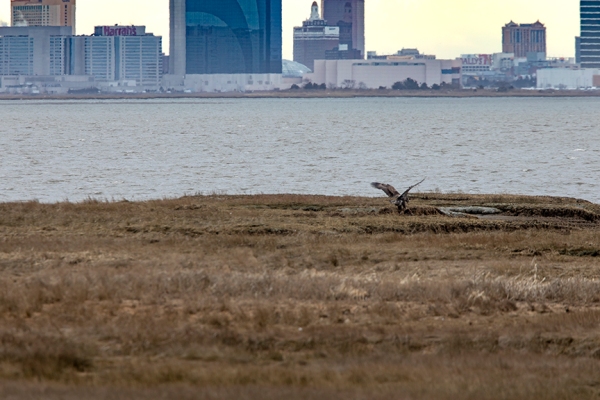 Immature Bald Eagle with Atlantic City Skyline across the water

On our photo trip to Blackwater NWR we were hoping to see a lot of Eagles. Winter is when they have the largest concentrations of Bald Eagles, so we were hoping for the best. We saw quite a few in the distance but not many close by. I saw one on the ground across from pool 3a, looking around with some feathers around so I assume it had a meal. This Eagle then flew into a nearby tree. Then, I believe the mate, joined him. This Eagle was on a snag in the water, on the other side of the Wildlife Drive. They were now a little closer, but I still needed to change my 1.4x teleconverter to a 2x to get even closer.  Then I got my tripod and stacked the 1.4x teleconverter with the 2x teleconverter to try to get even closer. I was using a Canon 1D MkIV with a 1.3x crop factor (from full frame DSLRs) so with this combination I had a field of view equivalent to 1120mm @ f/11 wide open, so I stopped down to f/16 & f /22 for a series of shots to see what I could get sharpness wise. Luckily my subjects cooperated and were fairly static movement wise. It was a somewhat dull day so I had to up my ISO more than I like to use. They cooperated for quite a while and they attracted quite a few other photographers, so we moved on. 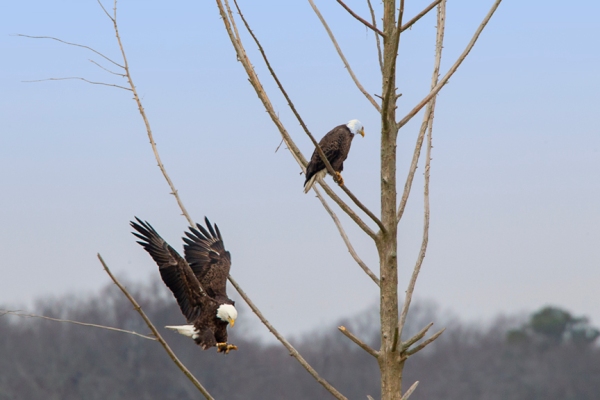 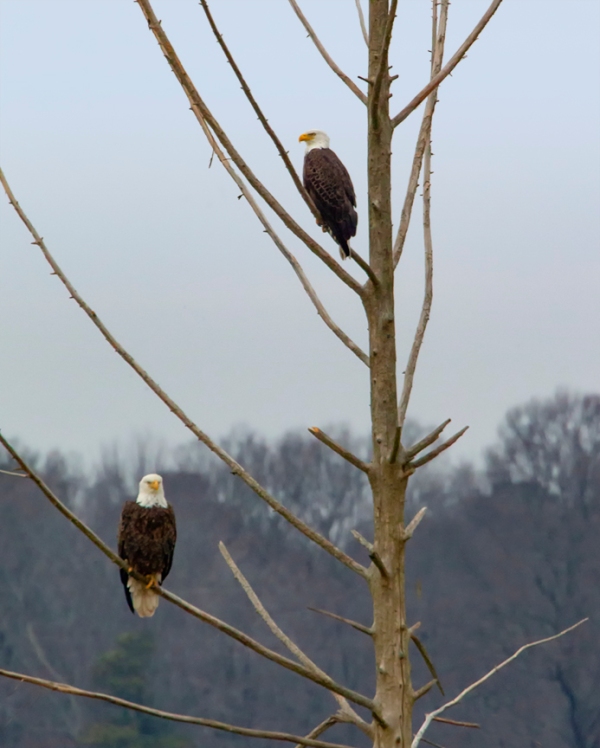 Bald Eagle On Snag At Sunrise

This is a double header. A Bald Eagle early in the morning, Plus a colorful Sunrise! This combines a couple of the reasons I enjoy photographing at the Blackwater National Wildlife Refuge outside of Cambridge, Maryland. Shot with a Canon 400mm f/4 DO lens with a Canon 1.4X teleconverter. The Eagle was backlit, so I exposed for the sky, then opened up the shadows in Adobe Camera Raw.