A Different Kind Of Bird 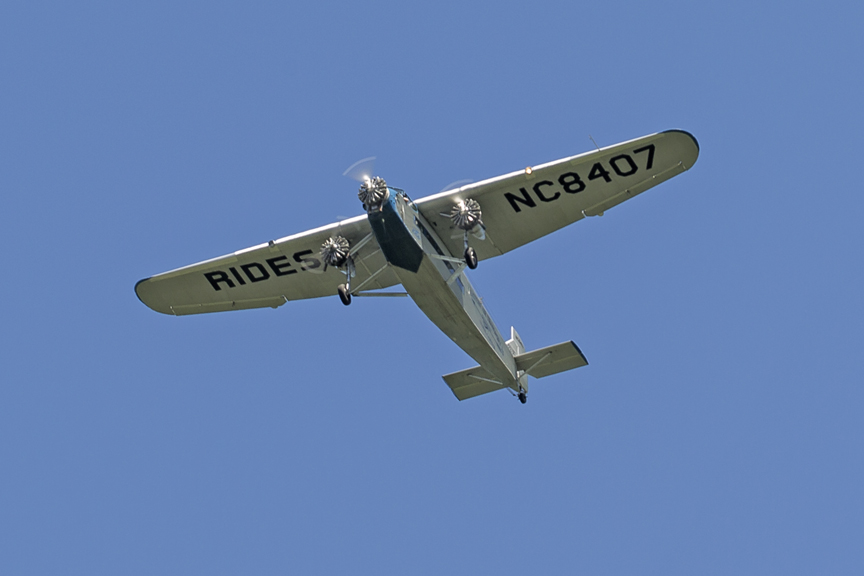 While at Longwood Gardens last year, in the meadow, I heard a loud plane going over. Many times Military aircraft fly by, jets or helicopters. But it sounded different than a usual plane. Looking up I was surprised to see an old Ford TriMotor flying over. It made several passes during the time I was there. I only had a 150mm Macro lens with me at the time, so this is a pretty heavy crop. Longwood Gardens Meadow Garden is 86 acres and offers guests a chance to see wildlife, native wildflowers and grasses, and a historic Colonial home that tells the story of how the land has evolved from the 1700s. It is great for walking and looking for flowers, plants, butterflies, bugs and basically a wide variety of photo subjects. From landscapes to macro. It is sort of a challenge or treasure hunt to see what you can find to photograph. Or more what you can do to make the most interesting images from what you do find.

Years ago I used to do a lot of Aviation Photography. It became “Old” though, same planes, baking on hot tarmacs looking up at the sky. And at Airshows everything was overpriced, even a bottle of water was $3 to 5. Then after 9/11, many of the military events limited you to 1 camera, 1 lens. So I moved on to birds and other subjects. Definitely more challenging and for me more fun and satisfying.

Being curious, I looked up registration number of the TriMotor that had flown overhead, and it had quite a history:

This Ford 4-AT-E Tri-Motor (c/n 4-AT-69), registered as NC8407, was the 146th off Ford’s assembly line and first flew on August 21, 1929. It was sold to Pitcairn Aviation’s passenger division, Eastern Air Transport, whose paint scheme is seen on the aircraft today. In 1930, it was leased to Cubana Airlines, where it inaugurated air service between Havana and Santiago de Cuba. The airplane was later flown by the government of the Dominican Republic, and in 1949 returned to the U.S. for barnstorming use. In 1950, it was moved from Miami to Phoenix and was refitted with more powerful engines for use as a crop duster – with two 450 HP engines and one 550 HP engine, it became the most powerful Model 4-AT ever flown. In 1955, it was moved to Idaho and fitted with two 275-gallon tanks and bomb doors for use as a borate bomber in aerial firefighting. Then in 1958, it was further modified for use by smoke jumpers. After working for a variety of crop spraying businesses, it was moved to Lawrence, Kansas, in 1964, where its new owner flew barnstorming tours. In 1973, a severe thunderstorm ripped the plane from its tie-downs, lifted it 50 feet into the air, and smashed it to the ground on its back. The Experimental Aircraft Association (EAA) subsequently purchased the wreckage, and it was restored over a period of 12 years. It was displayed in the EAA AirVenture Museum until 1991 when it began annual tours during which rides are offered.

2 Comments on “A Different Kind Of Bird”